AMD has been ahead of the curve for a while now, with its chiplet-based Zen CPU architecture making waves through the industry... but the industry moves so fast it's always time for change. Well, that change comes in the form of "X3D" packaging, and it's coming to codename Milan-X.

Patrick Schur tweeted out today that AMD is "working on a new CPU" that is codenamed Milan-X that will use stacked dies. ExecutiveFix backed up the leak, saying that codename Milan-X will use X3D stacking technology and will feature the Genesis-IO die, which is the codename of the current-gen Zen 3-based EPYC architecture.

This won't be inside of your new Ryzen CPU, but rather it will be what AMD will use to fight its competitors in the data center market. AMD recently teased a simplified diagram during its Financial Analyst Day that packed four compute tiles in a 2 x 2 pattern, with stacked memory surrounding the chip. This hybrid approach is called X3D, as it combines Hybrid 2.5 and 3D stacking technologies. 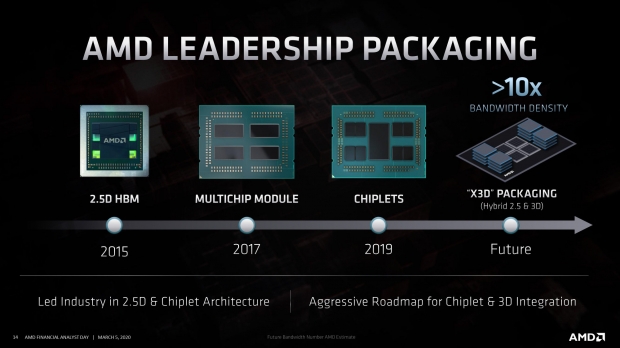 In between now and X3D packaging technology is MCM (multi-chip module) designs with GPUs, which will see similar chiplet-based technology that AMD has found great success in with its Zen CPU architectures and recent releases of Ryzen, Threadripper, and EPYC processors.