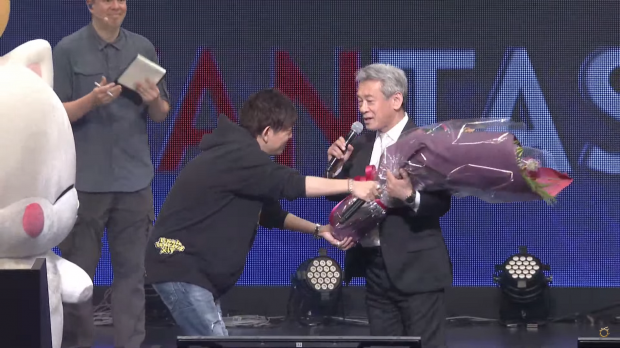 At the Final Fantasy XIV Fan Fest 2021 event, MMO producer Naoki Yoshida confirms Yoshinori Kitase now controls the future of the popular RPG franchise. Kitase has been instrumental in shaping the creative forces behind the series and directed both Final Fantasy 7 and 8, and producer a ton of games including Final Fantasy 10, 13, and the new Final Fantasy 7 Remake.

Yoshida says Kitase was named brand manager in April, however Square Enix didn't reveal any information to investors on its IR page. Hashimoto had served as the steward of the franchise for many years, overseeing Square Enix's internal Business Division 3 for six years.

"So as we mentioned, in April, the title of Final Fantasy brand manager was handed over to Kitase-san after many, many years of Hashimoto-san handling it," Yoshida said (begins around the 5:49:00 mark).

Yoshi-P joined Hashimoto on stage to commemorate his instrumental work in the Final Fantasy franchise, offering a token of appreciation with a bouquet of flowers.

"I think back to the first time I joined the Final Fantasy 14 project and had a very tough time with everything that was going on. At that time, Hashimoto-san came and supported me from the shadows. We'd like to thank you for all your work, and all the work you'll do in the future,"Yoshi-P said.

Hashimoto says after 27 years, he will continue working at Square Enix.

"I am actually the ex-brand manager of Final Fantasy. It's actually my birthday this month, and I'm turning 63.

"I joined the former Square in 1994 and I've continued on for about 27 years since then, and I've been working with so many organizations up until now.

"I will continue my work at Square Enix, I will not disappear, and I appreciate your continuing support."