First off we saw an old school Nintendo GameBoy modded to mine Bitcoin, and now it's time for one of my fondest PC memories -- the Commodore 64 with the same modded treatment to mine Bitcoin. Check it out:

8-Bit Show And Tell has successfully modded a Commodore 64 system to mine Bitcoin, with the 1982 release packing a MOS Technology 6510 processor clocked at a super-speed-and-probably-cannot-run-Crysis 1.023MHz with a whopping 64KB of RAM (that's all you'll ever need -- Bill Gates) and 20KB of ROM.

It was the video of the modded GameBoy that prompted the modification of the Commodore 64 to get into cryptocurrency mining -- with the Commodore 64 modded to mine Bitcoin at just 0.3H/s which is, well, not good at all. The code was written in C programming language, noting that pure machine language could see hash rates increase by something like 10x according to 8-Bit Show And Tell.

Interestingly -- and some of you might even remember this, but the Commodore 64 can be upgraded with an add-in card that will provide performance improvements of up to 20x -- with the "SuperCPU" also teased in the video with 20x improvements in speed. Still, nothing will hold a candle to a GPU from the last few years -- especially a new GeForce RTX 30 series or Radeon RX 6000 series graphics card that can carve through mining like a hot knife through butter. 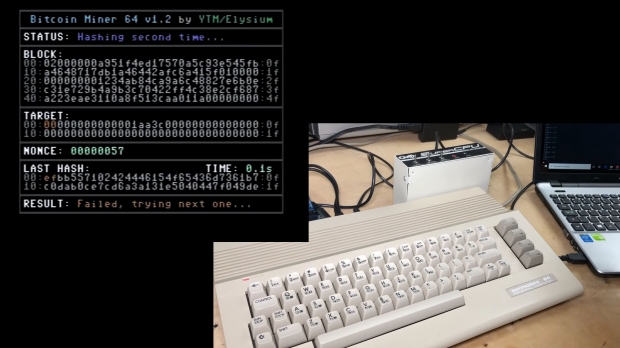