It was barely a week ago that we reported that MSI's new custom GeForce RTX 3080 Ti Ventus 3X OC graphics card was now shipping... and now it has been spotted online by a Polish retailer. 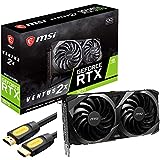