Nintendo expects to sell 250 million games next fiscal year, up 25% from the current goal, sources tell Bloomberg. If this growth trend continues at even a 57% rate, the Nintendo Switch will dethrone the Wii in mid- to late 2022. 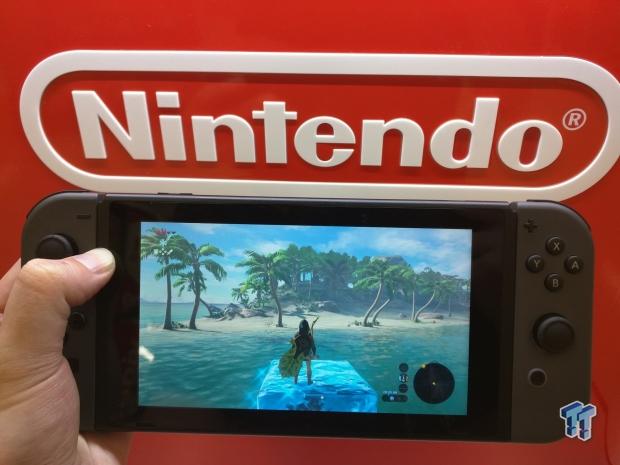 Nintendo has lofty aspirations for the Switch in Fiscal Year 2022 (ending March 31, 2022). The company expects to sell 250 million games next year, an increase of 50 million units from the current game sales target. This trajectory could crown the Switch as the king of Nintendo's game sales. 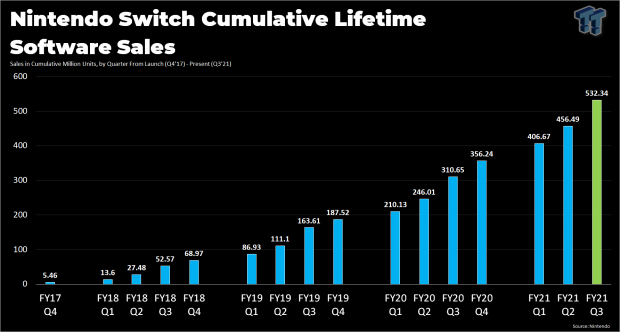 First, we need to do a bit of math. As of Q3'21, Nintendo has sold 176.1 million games out of its conservative 200 million goal. Nintendo currently has to sell 23.9 million more games in Q4 to meet this goal. Past trends show this is undoubtedly doable (Nintendo sold over 45 million games in Q4'20, for example). 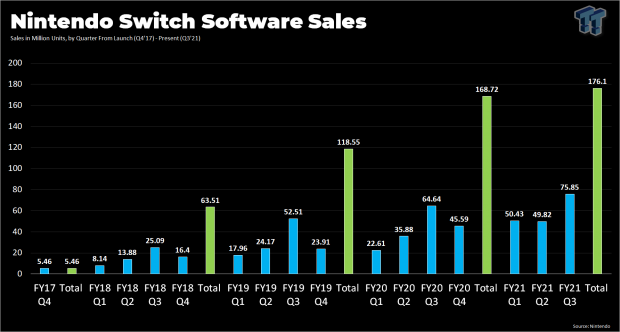 Software and hardware sales have grown more in the current fiscal year (FY2021) than any other time in the Switch's history and marks the second consecutive year of record-breaking results. Nintendo still has another quarter (Q4) to raise sales even higher. Software has hit 176.1 million so far (+4.38% over record FY2020 highs of 168.72 million) and Switch hardware has sold 24.1 million units (+4.7% over FY2020 record highs of 23.1 million).

Based on these numbers, Nintendo expects total Switch software sales to hit 806 million units by the fiscal year ending March 2022.

This would put the Switch close to the all-time sales records held by the Wii (920.81 million) and the DS handheld (948.64 million). The Switch would only need to sell 142.54 million games in FY2023 to dethrone these platforms. 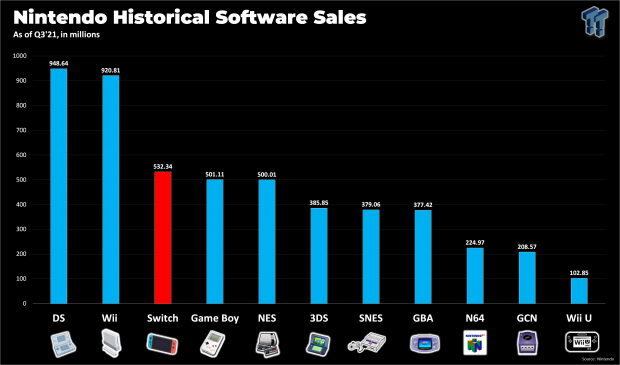 If these trends continue at just a 57% sales rate (if Nintendo sells 150 million games), the Switch could dethrone both of these platforms and become Nintendo's #1 game-seller by mid-2022.

This would coincide with the Switch's seventh year on the market, and whether or not this growth continues is based wholly on Nintendo's upcoming slate of titles and games. Remember, first-party Nintendo games regularly make up over 75% of quarterly game sales on the Switch. A regular rollout of first-party games is vital to ensure continued software growth.

Bear in mind that none of this information has been confirmed by Nintendo. Bloomberg cites sources who have been internally briefed on Nintendo's non-public forecasts.