Valve smashes into 2021 by breaking a new player record as coronavirus lockdowns and precautions stay in effect. 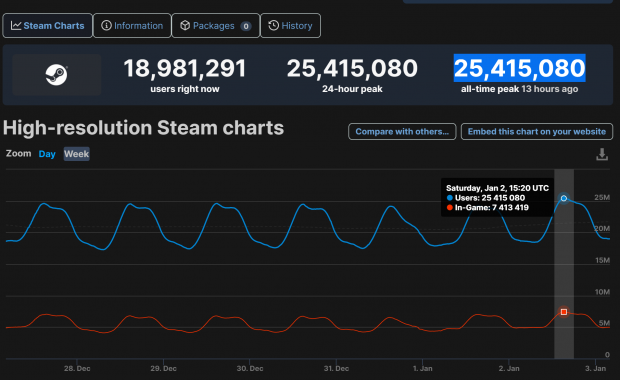 According to SteamDB, Steam just hit a new concurrent player high of 25 million for the first time in its 18-year history. The record was set about 13 hours ago and Steam now has a new record concurrent player peak of 25,415,080. The previous record was achieved in March 2020, where 24.38 million PC users logged on and played games at the same time.

We can only imagine what kind of revenues Valve is enjoying thanks to the rise in active players. Since Valve is a privately traded company, we don't get access to their earnings or sales figures, but we did get a nice breakdown of the top most-played games of 2020. Among Us was the fourth best-selling game in 2020 and enjoyed a player count that beat PUBG.

Coronavirus lockdowns and precautions have pushed consumers indoors, and they've turned to gaming as an outlet to pass time. 2020 was a big year for gaming and every major player from Sony, Microsoft, and Nintendo saw big boosts in software sales--Animal Crossing New Horizons sold nearly 1 million units per week since launch, for instance.