Could Cyberpunk 2077's planned free DLC get pushed back as CDPR gears up for big PS4 and Xbox One updates? 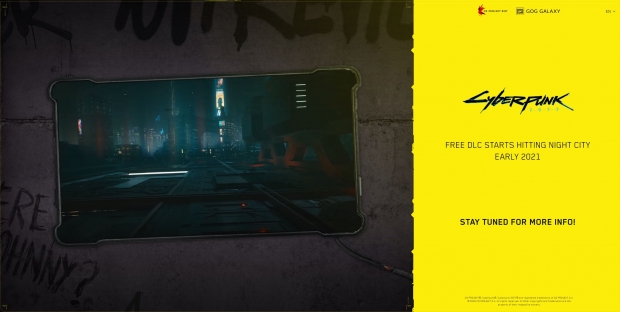 Just like The Witcher 3, Cyberpunk 2077 will get a bunch of free DLC for all gamers to enjoy. The official Cyberpunk 2077 website confirms the DLC will start releasing early 2021. However, this scheduled timeline could get disrupted. Right now CD Projekt RED has bigger fish to fry.

The studio is currently prioritizing the development of two big PS4 and Xbox One optimization patches that will fix the dismal performance on last-gen hardware. The devs expect to release one update in January 2021, and the other in February 2021.

The developers are also working on next-gen optimization patches for the PlayStation 5 and Xbox Series X versions of the game. If that wasn't enough, there will be lots of updates and patches released on all platforms to help shore up performance and eliminate glitches/bugs.

CDPR has yet to lay out official details for the free DLC or discuss timing specifics.

Back in September, CDPR President Adam Kicinski said Cyberpunk 2077 would have more DLC than The Witcher 3, and info would be revealed before release.

"You can expect a similar path [to The Witcher III] after release. You can expect more, actually. We're not going into too many details today, but everything will be clear before release. As we are close to the release, expect the post-release plans to be revealed fairly soon; a series of free DLCs and expansions will be described - as I said, you can expect it fairly soon and then everything will be made clear," Kicinski said in a September investor's call.

It's worth mentioning that the DLC confirmation went live on the website on December 9, a day before Cyberpunk 2077's release and subsequent controversy. Things might've changed internally for the studio.

CD Projekt RED is currently embroiled in a worldwide fiasco that's resulted in mass refunds, significant impact on its reputation, and even multiple class-action lawsuits from investors.