Cyberpunk 2077 is nearly here and now we have an early look, but this is nowhere near final, at the performance of CD PROJEKT RED's new masterpiece if early reviews are anything to go by. 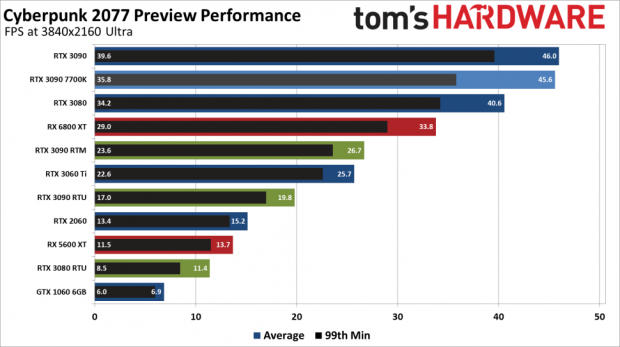 NVIDIA technologies are throughout Cyberpunk 2077 with ray tracing and DLSS at launch, while support for AMD FidelityFX Super-Resolution for RDNA 2-based Radeon RX 6000 series in the future. Tom's Hardware has benchmarked an early release of Cyberpunk 2077 -- which is an early version of the code, as explained by GamersNexus:

So the DRM on Cyberpunk 2077 for reviewers is specific and GamersNexus says is "known to reduce performance". This will "not be active on launch day, therefore any testing published today will not accurately reflect launch performance. CDPR warned us of this, so we are waiting for launch day".

I will be following suite, and not benchmarking the game until post-launch to provide more accurate numbers -- but the early numbers on Cyberpunk 2077 seem to show that it's going to be the new Crysis. It crushes every single graphics card in its path at all resolutions.

Right out of the box we're looking at 46FPS average at 4K on the GeForce RTX 3090 in Cyberpunk 2077, while the RTX 3080 is capable of 40FPS and the new Radeon RX 6800 XT hits 34FPS. Wowzers, this is truly the new Crysis if these early numbers are anything to go by. Even if they improve by 10-15% at launch, mixed with a post-launch driver, you still won't hit 4K 60FPS with any GPU on the market.

This is why it would be nice to have mGPU support... we would see double these numbers like we did in this recent test on AMD Radeon RX 6800 XT graphics cards in mGPU mode. 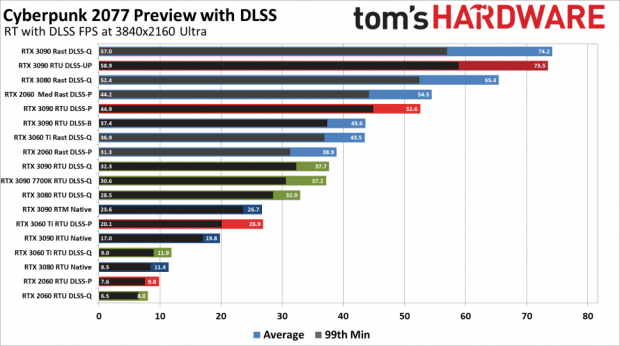 NVIDIA gets some help from enabling the RTX-powered DLSS (Deep Learning Super Sampling) which when enabled sees the GeForce RTX 3090 pushing up to 74FPS while the RTX 3080 is capable of up to 65FPS average.

You can read more about Cyberpunk 2077 and its early performance on the PC over at Tom's Hardware.