A new 10-foot-tall metal structure was discovered at the top of Pine Mountain in Atascadero, California. There's no information on how the monolith got there, but the monolith on Pine Mountain "was welded together at each corner, with rivets attaching the side panels to a likely steel frame inside. The top of the monument did not show any weld marks, and it appears to be hollow at the top, and possibly bottom" reports Atascadero News.

There's a bit difference with the new monolith in California, as it is not cut into the ground itself -- meaning it can be pushed over if someone rammed it hard enough. The Atascadero News estimates the metallic monolith weighs around 200 pounds. 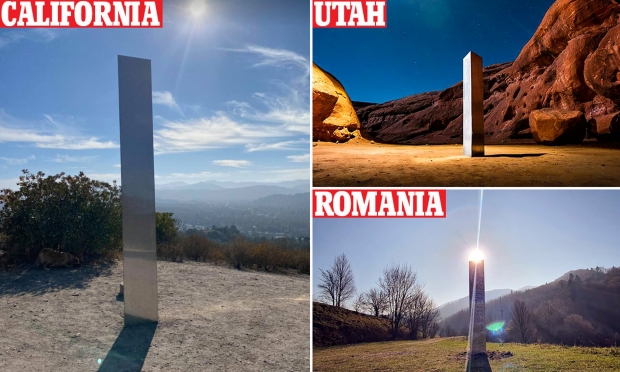 As for the monolith, the paper reports that it appears to be made from "stainless steel, similar to a hood above the stove in a commercial kitchen. The reflective material give the obelisk a mesmerizing shine as the sun, shadow, and Santa Lucia Mountain range converge on the vector as the prism redistributes the light from one of the highest points in Atascadero".

You can read the full story on the new monolith in Pine Mountain, California at the the Atascadero News.