With any new console generation comes lots of talk about price, the magic number that makes or breaks a company's hardware sales. We still don't know the full price range of the entire 9th console generation, but that doesn't mean we can't take a look back at historical data to see how the industry has changed. 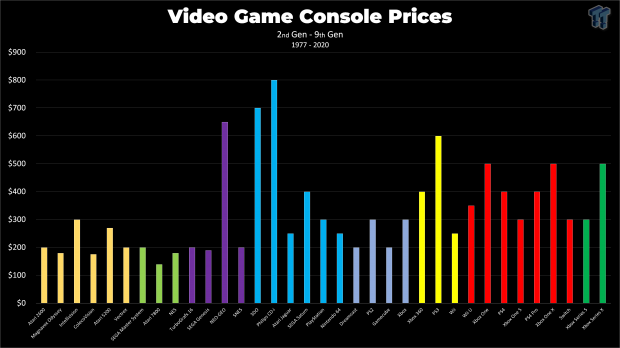 Microsoft just confirmed the Xbox Series S at $299, and we could see the Series X drop at $499. But how does this compare to the 8th gen? Or the gens that came before it? To reflect on pricing trends throughout the years, I put together a series of quick graphs that compare launch pricing of key consoles across nine generations of hardware. The list starts with the Atari 2600 in 1977 and ends with the Xbox Series S in 2020.

By no means is this list exhaustive, and it's not meant to be a perfect graph of every console ever released. That'd be a nightmare considering the dozens of Pong consoles released in the '70s. As you can tell by Atariboy2600's awesome timeline table, there's a lot of consoles missing from our list. 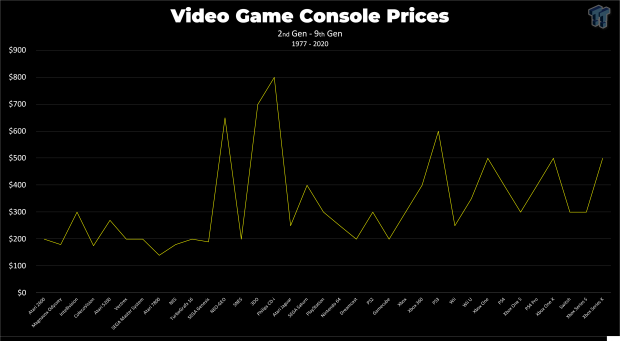 We thought it more pertinent to highlight the more well-known systems to solidify past, current, and possibly future market trends when it comes to hardware.

The trends are pretty clear. Not only are there a lot less console-makers on the market, but the prices have evened out. We haven't seen a $599 console since the PlayStation 3's doomed release in 2006. The higher-priced systems maxed out at $499 and Microsoft holds the mantle for this big MSRP with the Xbox One (2013) and Xbox One X (2017). 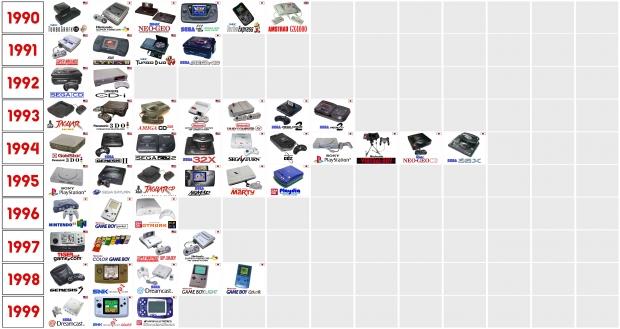 The largest MSRP goes to the Philips CD-i, an interesting if not lackluster system that tried to capitalize on the newer CD-ROM disc tech. It was a complete failure and served up some of the worst games of all time, including two awkward Zelda games: Wand of Gamelon and Faces of Evil. 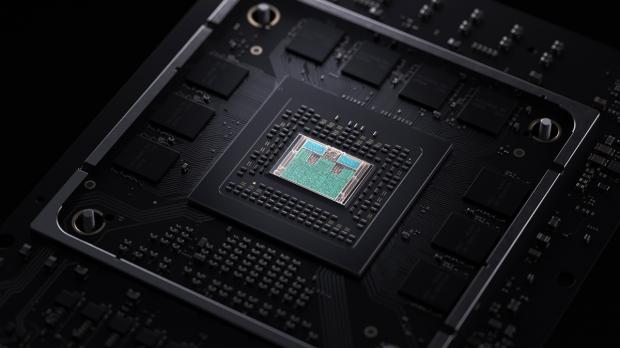 Despite rising costs of chip production and manufacturing, console pricing hasn't dramatically across the 8th generation because companies can offset spending hits with digital distribution. Consoles are typically made at a loss--well except for the Switch, which is made at a profit for Nintendo--but now companies can use online storefronts to make up for those costs.

The 9th generation, which includes the Xbox Series X, Series X, and PlayStation 5 systems, will be the most expensive generation to produce. Microsoft says the specialized 7nm chips from AMD are quite costly to make, and past reports say the PS5's RAM and flash cost $250 alone.

Despite this rise in costs that Sony and Microsoft must pay, the Series X and PlayStation 5 are expected to maintain a more conservative $499 MSRP that consumers will pay.

Nintendo, Microsoft, and especially Sony make billions every year from digital game sales, monetization, and subscriptions. The direct-to-consumer route removes friction by allowing ease-of-access and lets platform holders keep 100% of revenues from all first-party games sold on the network, all while avoiding shipping costs, manufacturing, and giving retail stores their cut.

Note:This data was correlated from various sources, including Wikipedia pages, IGN historical data, and my own coverage here at TweakTown.