Well, Titanic is being turned into a board game with Titanic: The Game. Spin Master Games has used the 1997 movie Titanic for its inspiration for the game, pulling the characters that Cameron used in the movie with players able to play as Jack, Rose, Cal, Ruth or the Captain.

But get this, they thought it was a good idea to market Titanic: The Game, a tragedy where over 1500 people died on April 15, 1912. But yeah, they're serious -- check out how they describe the game:

"Holy ship...we're sinking! Get ready for some serious nostalgia as you play Jack, Rose, Cal, Ruth or the Captain in the game of Titanic. Your strategic decisions determine whether you sink or float, as you make life or death decisions at every turn! It's up to you to save as many passengers as possible from the sinking ship over the course of nine rounds by gathering life rafts and supplies. Getting on a lifeboat won't win you the game, however. Just like in the movie, you'll have to be heroic to come out on top!"

Bleeding Cool reports that Titanic: The Game is for "2-5 players and comes with 1 Titanic Board, 72 Cards, 54 Wood Mini Meeples, 40 Action Cubes, 5 Plastic Standees, 1 Dry Erase Marker, 4 Dry Erase Punch Sheets, and 4 Punch Sheets. So a lot of things going on at once that it appears you'll need to plan and keep track of. We haven't played it yet, but if you'd like to give it a spin, you can buy it now for $25 at Walmart and Target". 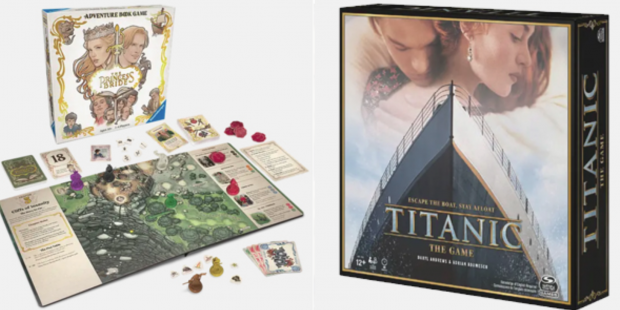