Take-Two's latest yearly earnings jump across the board as it rides a big digital wave of game sales and monetization. 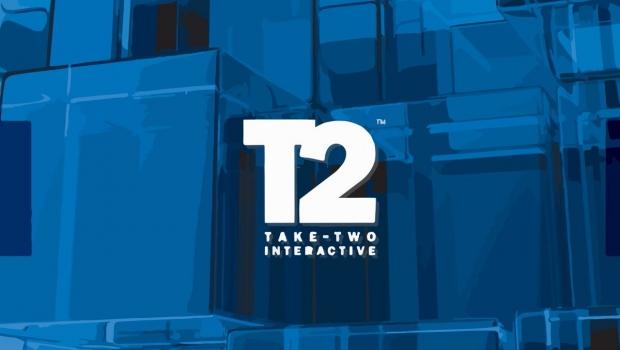 Grand Theft Auto owner Take-Two Interactive just released its Fiscal Year 2020 earnings report, and the results are fantastic. Thanks to heavy-hitters like NBA 2K20 and GTA V as well as the myriad of multi-platform titles, Take-Two generated consistent high earnings like a well-oiled money-making machine.

Take-Two pulled in $3.08 billion in net revenues during the yearly period, driven mostly by sharp upticks in digital game sales and a surge in microtransactions. 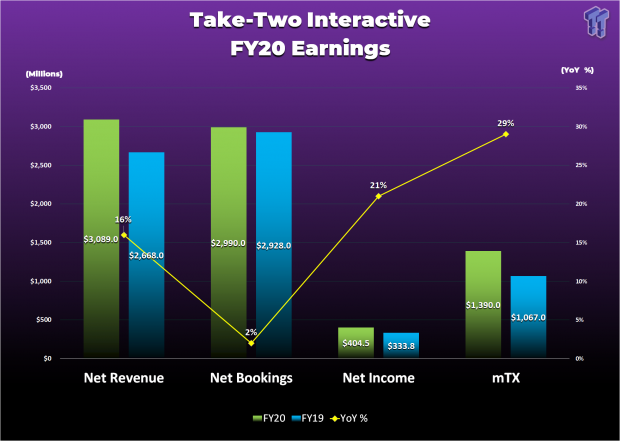 NBA 2K20 in particular was the main driver for digital mTX growth, and saw huge engagement spikes in the year with DAUs up 15%. MyTeam users--the monetized mode--were also up nearly 50% YoY.

Microtransactions made up 45% of net revenues, or $1.39 billion. Putting this in perspective, EA earned $2.8 billion from live services last year, and Ubisoft raked in $636 million in the same period. Activision-Blizzard made $956 million from mTX in a single quarter. 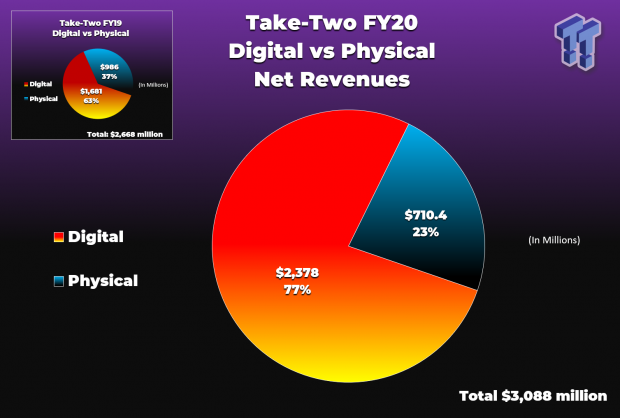 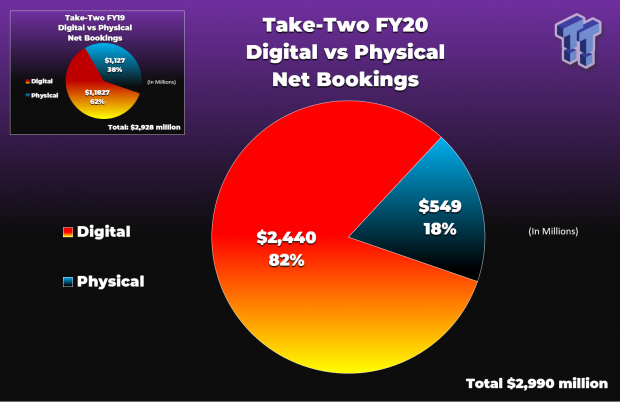 Net bookings, which are net revenues minus expenses like licensing fees, were also massively influenced by digital.

Digital made up 82% of net bookings, jumping a massive 20 percentage points YoY, whereas physical only made up 18% of net bookings.Total physical net bookings dropped a staggering 51% from FY19. This loss is mostly attributed to Red Dead Redemption 2's launch in FY19, which drove huge retail sales, and the absence of an equivalent AAA game in FY20.

Remember that Take-Two doesn't get to keep all the revenue it makes. Take-Two spent $1.5 billion on expenses in the period, the bulk of which was used on R&D for future in-development games. The company currently has a massive 93 games in development that it plans to release across the next 5 years (but many of them are mobile games).

The company plans to make between $2.5 to $2.6 billion in net bookings in FY21, roughly 16% less than FY20. Microtransaction earnings are expected to jump 60% on the heels of new annualized sports games and of course GTA Online.

"Fiscal 2021 promises to be another great year for our organization, and we are well positioned to both capitalize on the many opportunities within our -- to stray and to navigate the uncertainties of these times," Take-Two CFO Lainie Goldstein said in the call.