Black Ops 5 won't be happening in 2020. Instead, the game will be called COD: Vietnam and takes heavy inspiration from Sledgehammer's scrapped Vietnam-era shooter. 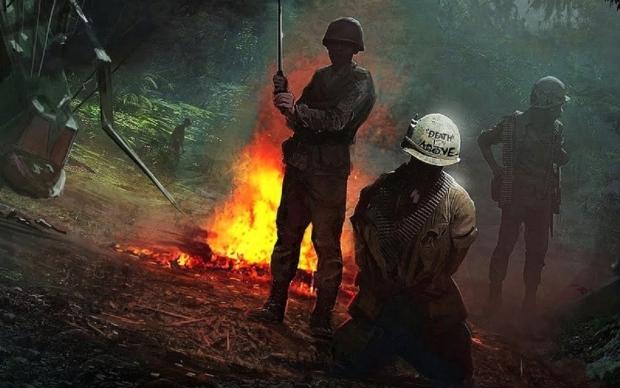 This year's Call of Duty game will be a bit different. It's a sort of spin-off Cold War-era prequel that sets up the Black Ops franchise. Sources tell The Gaming Revolution the game won't be called Black Ops 5, and sources also tell Jason Schreier the game is being referred to internally as Call of Duty: Vietnam (Schreier broke the news on the game a year ago).

This isn't a surprise. Rumors have been circulating on a campaign that spans the entire Cold War era including both the Vietnam and Korean Wars. It's now uncertain if the Korean War era will be included. The game is said to include titular Black Ops characters like Frank Wood and is drawing heavily on Sledgehammer's once-cancelled Vietnam project. Treyarch will be in principal development, but Sledgehammer Games and Raven Software will jump in to assist.

Back in 2016, Sledgehammer teased their vision for a Vietnam-based CoD. The game was ultimately cancelled in favor of Sledgehammer's CoD: WWII that released in 2017 instead.

The Vietnam-era FPS was internally called Fog of War and started development way back in 2014. Infinity Ward was originally leading the project, sources say, but Sledgehammer was conscripted when key Infinity Ward devs like Jason West and Vince Zampella left to form Respawn Entertainment. The game is described as more visceral and chaotic than normal Call of Duty titles...but we're not sure how it could top the brutality of 2019's Modern Warfare reboot.

Activision hasn't confirmed anything yet, though. The publisher's only remarks on the project have been pretty muted.

"In Q4, we plan to launch the next premium release of Call of Duty. We can't wait to unveil what our teams have been working on, and we feel great about the content," Activision CFO Dennis Durkin said in a recent earnings call.

Activision CEO Bobby Kotick sees Call of Duty growing exponentially in 2020 compared to 2019. It actually already has thanks to the massive success of its free-to-play BR game Warzone and the mega-hit CoD Mobile. This trend will continue with Vietnam's premium release.

"We expect significant growth in the Call of Duty franchise in 2020 as compared to 2019, as a result of this and from other unannounced Call of Duty initiatives," Kotick said in the call.