Nintendo's latest Switch model could include a mixed reality headset with its own dedicated screen and internal SoC components. Or it could be a new 3DS-like folding Switch revision. 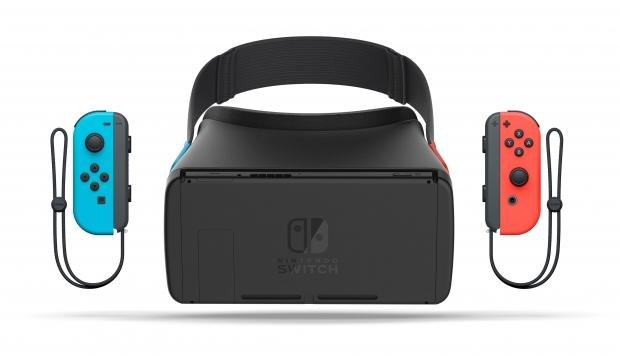 References to a new Switch model were uncovered in the latest 10.0.0 firmware patch, igniting tons of speculation on the internet. Hacker Mike Hestin discovered the designation after datamining the update. The new model, nx-abcd, hints at a new form factor revision with a second screen, and it could mean a Switch console + dedicated mixed reality headset combo.

So far, Nintendo has only toe-dipped into VR by using the Switch tablet screen as a slot-in display in makeshift cardboard Labo kits. The results are disorienting to say the least. Nintendo is clearly interested in VR, and recently exposed aspirations to explore AR too. It's possible this new Switch model could be a Switch handheld-console hybrid that comes with a special Nintendo-branded mixed reality headset with customized internals.

"As for AR, it is definitely one of the many aspects we are interested in. We are currently researching what interesting ways we can utilize it," Nintendo President Shuntaro Furukawa said in January.

According to Hestin's discoveries, the new Switch model would be on the refreshed 16nm Tegra X1 "Mariko" chip for improved battery life (the same chip as the Switch Lite and revised Switch), and may utilize LPDDR4X RAM instead of the base Switch's LPDDR4 memory.

Our prediction is that the new Switch will interface with a Mixed Reality HMD in some way, perhaps wirelessly or perhaps via USB-C, and interact with games on both the Switch handheld-console hybrid and the Switch Online community. We could also see special JoyCon wands created for the device.

This is a lot of speculation, and admittedly we've done our own fair share of speculation on Switch upgrades. But all of it is based around discoveries made by the Switch hacking and modding community.

The datamined nx-abcd references point to a new type of form factor. The "d" in the codename is the big clue.

Currently there's five Switch models with their own internal names, as explained by ResetERA user JershJopstein:

It's also possible this new model has a folding second screen similar to the 3DS's clamshell design. The thought here is the folding Switch could support 3DS gamecards for native backwards compatibility as Nintendo phases out the 3DS family. It could look something like Mike Choi's awesome Nintendo Switch DS foldable.

Back in June 2019, Nintendo said it's still experimenting with new Switch hardware, and this new second-screen device could be a result of that. Coupled with Furukawa's recent AR comments, it certainly seems plausible. Then again, Nintendo is also doing weird things with hardware and peripherals and most of them never come to light.

There's also a possibility of a new TV-only Switch, but that's unrelated to the nx-abcd designation. The digital-only Switch could use the Calcio nx-abcb designation and tap the new Mariko chip for efficient performance.

The idea is that Nintendo could release a low-cost Shield TV-like Switch that replicates the full unlocked 768MHz performance of a docked Switch console's GPU. The device could interface with a second Switch or controller peripherals via Bluetooth, creating a second-screen style Wii U type of experience, but ultimately it'd be aimed at a cheaper entry point for the Switch family.

This Switch TV would theoretically fit in between the transforming handheld-console hybrid and the handheld-only Switch Lite. The price hierachy would look something like this: Original Switch at $299, Switch Lite at $199, Switch TV at $149.

Remember that all of these ideas are speculation and haven't been announced and we don't really know what Nintendo is working on. But dataminers and hackers are always digging up neat little clues on what's next for the Switch family.