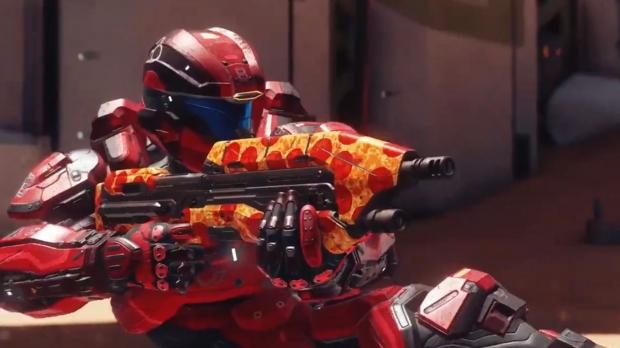 In today's Halo NERF gun reveal, 343 Industries inadvertently confirmed Halo: Infinite will have weapon skins, and we fully expect them to be monetized in some form. "Select products will also include an exclusive Halo Infinite code for unlockable game add-on content." A new Gamespot article confirms this add-on content is additional NERF weapon skins for the game.

While it's not been explicitly confirmed that buyable skins are included, it's not hard to see where Microsoft is going here. We actually saw this coming a mile away, originally predicting Halo: Infinite could have piecemeal cosmetic purchases combined with a seasonal battle pass scheme. Now that REQ packs--Halo 5's massively lucrative version of lootboxes--aren't coming back for Infinite, I expect to see layered monetization that could culminate in both cosmetic armor and weapon skins, along with the aforementioned battle pass system.

Halo: Infinite having some in-game spending option was always a given. All of Microsoft's biggest first-party games have some form of microtransactions complete with never-ending online play. Live services, subscriptions, and engagement is Microsoft's billion-dollar bread and butter.

In fact, it's possible 343i goes all out with monetization this time around. Everything we've heard so far makes Halo: Infinite sound like a live game, possibly with an evolving online campaign that continually shifts and changes over time. There's also the possibility of RPG elements. Like so many other details about Halo: Infinite, this live gaming focus hasn't been confirmed.

343i's next Halo game will be a launch game on the Xbox Series X in Holiday 2020. We've only seen small snippets of gameplay so far, and exact details are unknown.