Untitled Goose Game is one of those unique titles out there, and is a simple yet extremely effective creation from indie developer House House. But why is it so successful? The games composer, Dan Golding is scratching his head at this question as in a recent interview he expressed that it is has been "kind of weird" since the game has reached extreme levels of success. The games co-creator Nico Disseldorp said after the game sold 100,000 copies that the studio can "go on and keep making video games as long as we like now". The title recently passed 10x those sales with 1 million copies sold.

In an interview with GamesBeat, Golding said that "It was this weird, several stage process where for the first few days, almost the first whole week, we're like, 'Yeah, cool, people like this game. That's great. It's getting good reviews'. Then I remember one morning I woke up and Chrissy Teigen had tweeted out a photo of her and John Legend [buying the game] and was just - I have no frame of reference to understand what's happening. And I still don't, really. It's just been kind of weird from then on out."

Golding was then asked a follow up question regarding why he thinks the game has sold so well, here was his response, "I think there's something about the game that speaks to this moment in time where the whole weight of the world often seems to be crushing people. And this game is just about a goose, you know? Nothing more, nothing less. If the game has done anything, it's managed to create a little space of relief, which I think is fantastic."

I definitely agree with Golding's reasoning on this one. Untitled Goose Game captures the simplicity of life and lets players enjoy being a mischievous goose, nothing more, nothing less. The game doesn't burden players with big quests, enemies, political opinions, religion or any other topics that could potentially hinder a players enjoyment. It simply lets players enjoy the life of a goose that wants to have a bit of fun by playing pranks, and I think that's one of the core reasons why gamers are enjoying the title. 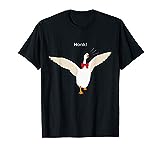