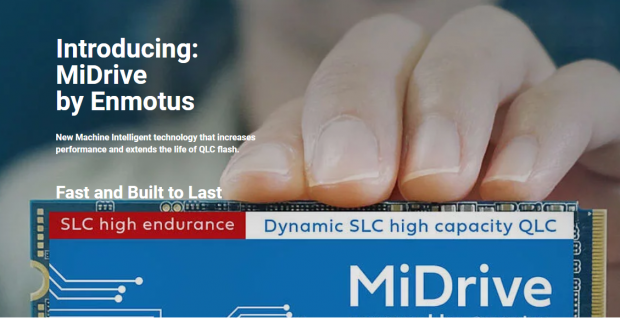 The new MiDrive SSDs feature two types of memory on the same drive: quad-layer cell (QLC), which has higher capacities and is more cost-effective for OEMs, and speedier single-layer cell (SLC) flash on a single NVMe drive. Enmotus' unique machine-learning MiDrive technology automatically segregates most-used data and games and stores them on the faster SLC memory, whereas the bulk of the data is stored on the QLC portion.

It's also worth noting that Enmotus is the same company who made AMD's StoreMI tech, which allows users to combine multiple drives to hit HDD capacities with SSD-like speeds.

A Better Way Of Managing Your Data

Leapfrogging traditional caching and dynamic SLC caching techniques, Enmotus has come to market with a highly intelligent managed QLC based solution. This provides the best of performance AND capacity without sacrificing cost or using exotic flash technology. Simple, high endurnace 30,000+ P/E flash is combined with lower endurance QLC within a single M.2 device and managed by a machine intelligent software layer.

The Enmotus high endurance SSDs do exactly that. Traditional caching technologies exacerbate write amplification, resulting in additional writes to the QLC beyond the data that is actually written. MiDrive's machine intelligence results in not only a higher performing solution, but also longevity. SSDs wear out - it's a fact of life. However, intelligence can mitigate the risk of premature wear out failure by ensuring that all the heavy traffic goes consistently for frequently accessed data to high endurance media.

"MiDrive addresses not only the performance and endurance challenges of QLC, but future technologies as well. As flash manufacturers race to achieve price parity with hard drives, the endurance of next generation flash technology such as Penta or five layer flash is expected to get worse," said Andy Mills, CEO of Enmotus.

"The Machine Intelligence behind MiDrive solves this problem by enabling QLC and beyond to be deployed in applications without compromising warranty or longevity specs," continued Mills.