5G is already exciting on its own, and the same goes for 8K -- but the world's of super-fast internet connectivity and ridiculous amounts of pixels are being joined. 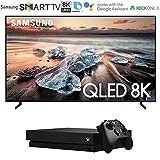