News has surfaced online regarding Google's next Home Mini receiving a decent upgrade all round when it is re-branded as the Nest Mini.

According to 9to6Google's sources, Google will be releasing a sequel to their Home Mini product, but instead of it being a Home Mini 2 it will have its name changed to Nest Mini. Not only is there a change of name but Google will also be upgrading basically all of its features as well. According to the sources, the Nest Mini will arrive with a built-in wall mount, upgraded sound, louder and better bass, increase in max volume and a headphone jack.

While these are just rumors for the time being, if they are true Google could be waiting to reveal this product alongside their upcoming announcement of the Google Pixel 4. The announcement of both the Nest Mini and the Pixel 4 is believed to be scheduled for Google's annual hardware event this October called Made by Google 2019. 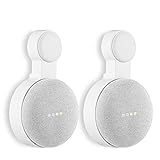