Boost Lock is something you can toggle in Precision X1 that locks the maximum GPU boost state at all times, meaning you get maximum performance, all the time. Boost Lock would override the normal dips in GPU clocks when your GPU load is reduced, keeping clocks at their set-high amount.

This new feature seems perfect for enthusiasts, overclockers, and reviewers ras you can lock a specific GPU clock that, something further than the reaches of what the GPU would normally boost up to. I think it is a great addition to Precision X1 by EVGA, hell one of the best new features in a while. 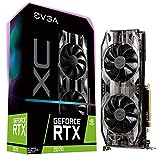