E3 2019 - The biggest change to Final Fantasy VII: Remake is its new action-based combat system, which is more like Final Fantasy XV or Devil May Cry than the 1997 classic. But Square Enix tossed in a spiritual successor to Wait Mode for good measure.

Final Fantasy VII: Remake's stylish revamped combat in a dynamic 3D environment affords for some crazy action, but it's not just about spamming slashes. Brute force will only get you so far. To take down hulking bosses you'll have to strategically master the game's new forked combat setup. Square Enix explains how its new hybrid system blends both real-time and Wait Mode-style mechanics.

"Succeeding on the battlefield requires much more than just hacking and slashing. Cloud needs to be tactical. He needs ATB," senior manager of product marketing Neal Pabon said during the E3 2019 gameplay demo.

Every character has two ATB bars in the lower right, Pabon explains, that slowly fill up over time. The bars will fill up faster when you land strikes against your opponent (as we noted in the original 2016 teaser). Once both ATB bars are full players can trigger a nifty new time-slowing Tactical Mode that's kind of like an interactive pause menu that lets players regain their thoughts and plan things out.

While in Tactical Mode you can cast spells like Fire and Cure (if you have the right materia equipped, of course), use items like potions and phoenix downs, and use special abilities like Cloud's Braver attack. Limit breaks like Barrett's Fire in the Hole attack or Cloud's Cross Slash are also triggered in Tactical Mode.

Normal strikes continually feed the ATB bar over time so you're incentivized to keep on striking--but also dodge and block when you can to avoid death. In this way, Final Fantasy VII: Remake's combat has a distinct flow and is a dance of finesse, strategy, and skill rather than brute button-mashing.

The new Tactical Mode slows down time, giving you a breather to plan out your next move.

Abilities, spells and items can be assigned to shortcuts for easy on-the-fly execution. Using an ability, casting a spell, or using an item likewise uses an ATB bar.

"It's up to you how ATB is used in battle. You can maximize your effectiveness by switching between characters or issuing commands to characters with full ATB bars."

The following modes were shown in the Final Fantasy VII: Remake footage:

Cloud also had Punisher Mode and Operator Mode on his ability quickbar, but we're not exactly sure what these are yet. Other characters' quickbar abilities shown in the trailer are: Tifa has Bash, Aeris has Tempest, and Barret has Overcharge.

Aeris uses magic while Cloud and Barrett dish out damage.

Enemies also have a Focus Gauge that fills up as they take damage. Once it's full they become staggered and you can deal bonus damage with each strike. It's best to save limit breaks for when bosses or enemies are staggered for insane damage modifiers.

Environments are destructible and dynamic this time around, matching up with more free traversal of combat areas. Players can hide behind debris as cover against devastating boss attacks.

That's pretty much all we see in the new footage but it's definitely an interesting combat system built around both mayhem-infused action and calm, careful strategy. As a huge fan of Final Fantasy XV I can't wait to try this game out when it releases in March.

Remember Final Fantasy VII: Remake won't release all at once.

Originally planned as a trilogy, Yoshinori Kitase confirmed the game is now split across two discs that'll launch and be sold separately. The first disc releases on March 3, 2020 and takes place on Midgar. It's so big Square Enix says it'll serve as a standalone game and a great entry point for new Final Fantasy fans. The first disc is also timed exclusive to the PlayStation 4 but will release onto other unspecific platforms at a later date.

Square Enix previously said the Remake will feature 90 hours of content, so each chapter should offer roughly 45 hours of play. 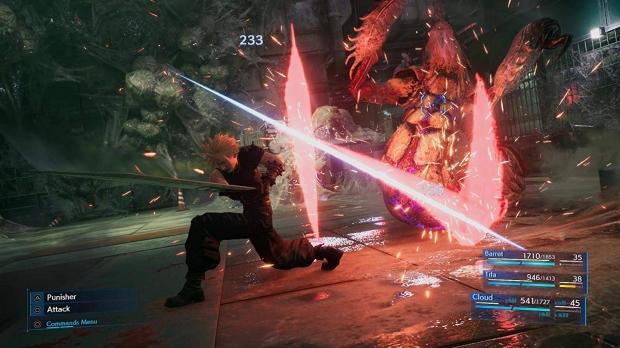