A new DLC is arriving for Soulcalibur VI tomorrow and it will be adding the unspeakable, cat hats. Yes, thats right, Soulcalibur VI will soon allow you to put cat hats on your fighters.

The announcement has come from the official Soulcalibur VI Twitter account and confirms that Soulcalibur VI will be updated to version 1.40. The update will be bringing 'Creation Parts' for both genders of the casts, totaling over 150 customization items, 87 new music tracks from previous Soulcalibur games, new colors, new update functions, numerous game adjustments, and balancing changes.

What shines most out of this update is the fact that players will be able to have feline fedoras, literal cat hats that are wearable. The Character Creation Set B will be released tomorrow on May 16th, and will be coming in at a price of $6. If you are interested in the full changes of this patch you can head on over to the official Bandai Namco website here. 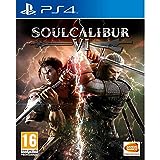