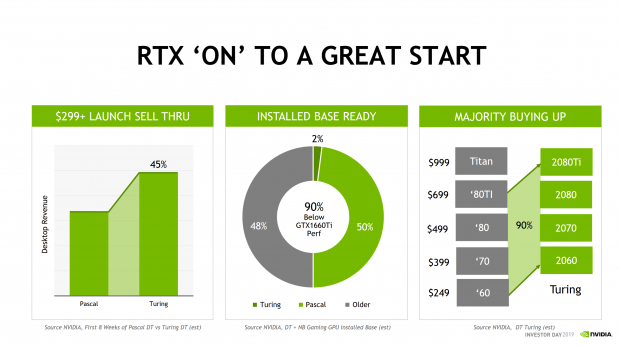 The company has said that Turing GPUs have sold 45% more than Pascal GPUs in the first 8 weeks of launch, and considering the harsh reception and huge prices of the GeForce RTX cards, it hasn't stopped NVIDIA from selling a bunch of them. But how much penetration has Turing had into gamers' PCs?

According to NVIDIA's own graph we can see that just 2% of NVIDIA's consumers have upgraded to a Turing GPU, while 50% are using Pascal (GTX 10/16 series) and 48% are using older-gen GeForce cards. Close to 90% of GeForce GTX 10 series owners that are upgrading are grabbing higher-end Turing-based GPU offerings, too. You can see that most people that have a GTX 1080 or GTX 1080 Ti are upgrading to a new RTX 2080 or RTX 2080 Ti, which is interesting to see.