The Nintendo Switch themed Nintendo Direct has revealed a critically acclaimed title that will soon be coming to the Nintendo Switch. Prepare your eyes and ears when 'Hellblade: Senua's Sacrifice' arrives on the hand-held console this Spring.

If you aren't really sure what Hellblade: Senua's Sacrifice is, the title was created by developers Ninja Theory and follows the story of Celtic warrior Senua. Senua begins her quest to save her dead lovers soul by journeying to hell and battling not only physical manifestations of demons and demonic creatures but her own mind as well.

Ninja Theory created Hellblade: Senua's Sacrifice alongside neuroscientists that specialize in psychosis traits, those traits have been implemented into the game to create a truly chilling experience as you follow Senua to the depth of hell. Having played Hellblade I can say that the awards the title earned such as audio and artistic achievement are more than deserved. The game provided an experience like no other for me, the voices you hear as a player truly do create an eerie and almost psychotic experience. Simply put, the closer Senua gets to hell, the more the player, and Senua will be lost in madness. Hellblade: Senua's Sacrifice will be arriving on Nintendo Switch in Spring 2019. 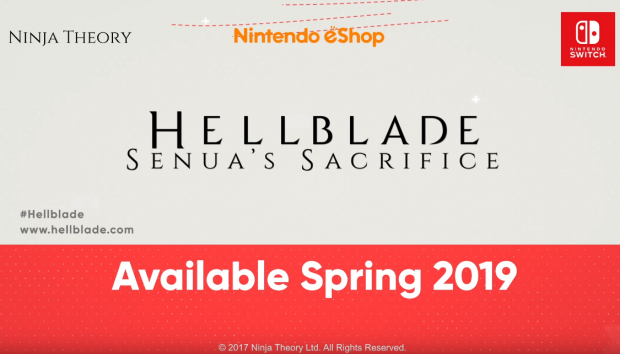