This isn't the firs time we are seeing a Nintendo Switch bundle specifically themed to a certain game, just last month it was revealed that Nintendo would also be giving the same treatment to the coming Pikachu & Eevee Pokemon games. Nintendo also announced that a Super Smash Bros. Ultimate Nintendo Switch bundle was also on the way, each of these bundles are very similar, the only real differences is the silhouettes change to the respective game.

Looking towards the Diablo III: Eternal Collection now, from the above image we can see that players that decide to pick up the bundle will be receiving a Diablo III themed dock and Switch. The bundle will also be "including all Dibalo III content" and also comes with a Diablo III Edition Switch carrying case. It should also be noted, players that pick up this bundle will also be receiving a bunch of in-game bonuses, some of which include a variety of items from The Legend of Zelda series, such as Ganondorf Transmog armor, a companion Cucco pet and a Golden Triforce Portrait Frame. 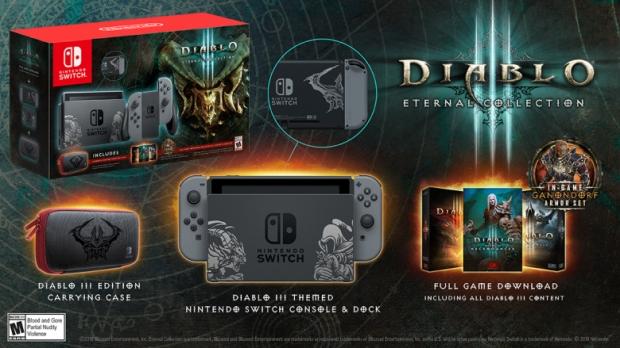 In other news about Diablo III: Eternal Collection, there has been a confirmation that there will be no inclusion of Link's gear within Diablo III for the Nintendo Switch. "We tried a variety of different ideas in testing, but ultimately we felt that Ganondorf best fit the world of Diablo", check that story out here.