AMD ripped up the multi-threaded CPU game with the original Threadripper 1950X and its 16C/32T of CPU power, but Team Red took it to the next level with Threadripper 2990WX by offering a huge 32C/64T and now Intel has finally caught up, but not beaten AMD. 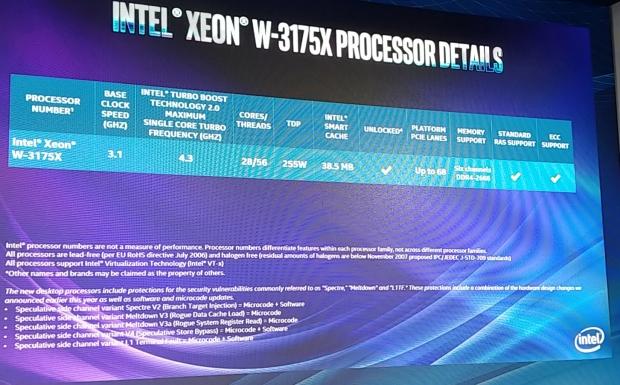 Intel unveiled its new Xeon W-3175X processor, the new 28C/56T chip based on the Skylake-X architecture. The new 28C/56T beast has a base CPU clock of 3.1GHz and boost clock of 4.3GHz, while it has a whopping 255W TDP, and a huge 6-channel DDR4 support, among a plethora of features and supported technologies.

Intel is offering up to 68 PCIe 3.0 lanes on the server-class motherboards (Xeon W-3175X won't work on X299 motherboards). There is 512GB DDR4 support on the new Intel Xeon W-3175X, which is strange since there are 12 x DIMMs on the supported motherboards.

Intel has told us to expect the new Xeon W-3175X processor to begin shipping in December, with no price attached to it just yet.