Kojima Productions dropped a new Death Stranding trailer at this year's Tokyo Game Show...and we're as lost as ever.

Death Stranding is a giant cryptic puzzle with tons of interlocking layered mechanisms, and gamers everywhere are keen on trying to solve it. In typical Kojima style, the latest gameplay trailer gives us more questions than answers to fuel the wild speculation. The footage was quite brief and revealed Troy Baker's very playful and bantering character (aka the Man in the Golden Mask) who appears to be with a villainous rogue outfit somehow affiliated with ancient Egyptian lore (or maybe that's just the style, who knows). What's even more interesting is Baker's skull mask is infused with eldritch magic that can collect the weird phantom darkness and manifest it into shapes. In this case, the Man in the Golden Mask summons a terrifying shadow lion to take out Sam Porter Bridges (Norman Reedus).

There's a lot to dissect here, and the Death Stranding Reddit has been busily connecting threads together. Do note that Baker's fetus-tank glows a baleful red, hinting at malevolence or perhaps some sort of corruption that allows for manipulation of the shadow-monsters. And of course he teleports away like a mischievous trickster.

Hideo Kojima also confirmed Death Stranding is still on schedule, and should release sometime before 2020 (likely in 2019 or thereabouts to coincide with the PS5's announcement). Check here for a full rundown on our Death Stranding content.

I'm almost hoping the game never comes out and the community continues banding together to solve these weird little mysteries. It's quite fun. 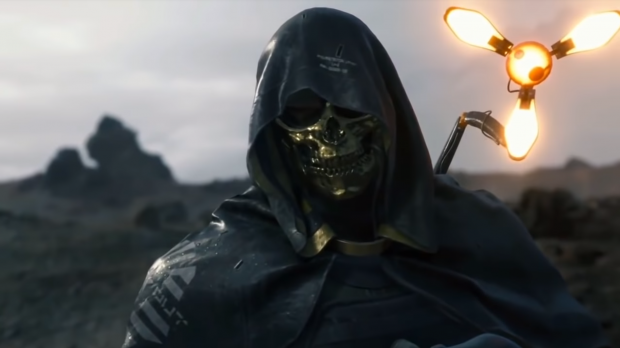