Intel is acquiring the freaking Justice League of industry heroes for its new GPU division, lead by GPU architect and legend Raja Koduri. 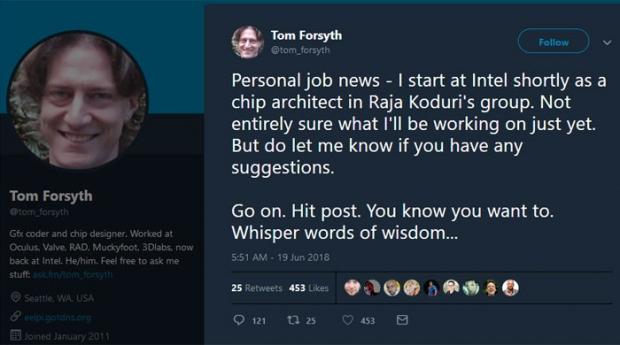 Intel's refreshed GPU division has some serious talent and brainpower behind it now, with Forsyth's recent announcement taking place on Twitter where he said: "I start at Intel shortly as a chip architect in Raja Koduri's group. Not entirely sure what I'll be working on just yet". Gives me shivers, the excitement for Intel's mysterious GPU division is growing, and I love it.

Forsyth worked on the Larrabee CPU architecture, something that kicked off the AVX-512 instruction set, and the Xeon Phi that was designed around the GPU-style highly parallel processing for general purpose computing. He's someone that has had major influence on the industry while working at not just Intel, but Oculus, Valve, and even 3DLabs.