To celebrate this week's release of 'David Brent: Life on the Road' on Blu-ray and DVD, we have 5 Blu-ray prize packs to give away thanks to our friends at eOne Home Entertainment. 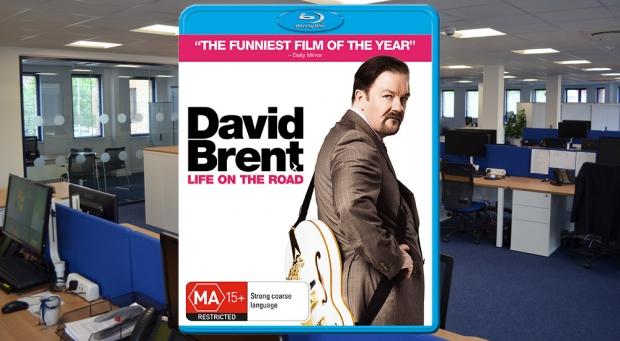 'David Brent: Life on the Road' sees the highly anticipated big screen debut of one of comedy's best-loved characters, David Brent (Ricky Gervais). The star of the hit BBC series The Office, Brent hasn't given up on his dream of rock stardom. Assembling a group of musicians who are just in it for the money, and a talented rapper in an attempt to gain some street cred, Brent embarks on a selffinanced tour - a last ditch effort to find fame and fortune. Featuring original music by the man himself, David Brent: Life on the Road returns Gervais to his most iconic character, once again pushing the boundaries of comedy with hilarious, excruciating and surprisingly moving results.

Which video game did Ricky Gervais lend his signature laugh to?

The first 5 correct answers drawn will each take home a copy of 'David Brent: Life on the Road' on Blu-ray, along with the films CD soundtrack. To enter, simply 'like' this post and share via Facebook or Twitter and send your answers, along with your postal address to ben at TweakTown dot com before the competition closes on December 17.

'David Brent: Life on the Road' is available on Blu-ray, DVD and digital at leading Australian retailers from December 14.