As we get closer to NVIDIA's GPU Technology Conference in early April, we're finding out more details on the next-gen Pascal architecture, and what cards will purportedly arrive under the new 16nm process. Now remember, these are just leaked specs on the purported cards - the specs could change, and so could the naming system NVIDIA uses on the next-gen cards. 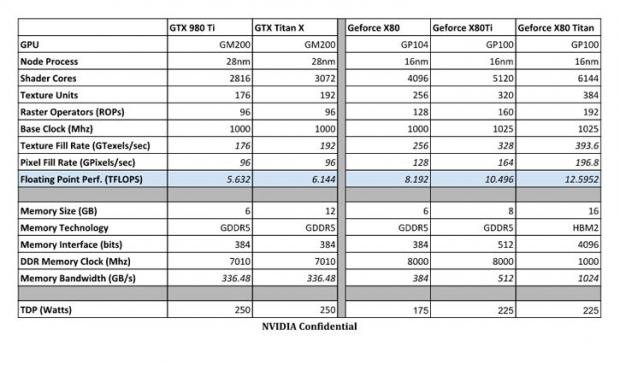 The chart notes that the Titan X successor will have 16GB of HBM2 on a 4096-bit memory bus with 1024GB/sec (1TB/sec) of memory bandwidth - all contained in a more-than-impressive 225W TDP. Wow.

The interesting thing to note here, is that the new cards have amazing power efficiency thanks to the 16nm process, with the GTX 1080 only requiring 175W and the GTX 1080 Ti with 225W. Not too damn bad at all. This means we're going to see ridiculously fast cards, that will also run cool and quiet.

We will know more in a couple of weeks time at NVIDIA's GTC event in early April in San Jose, and we will be there delivering the news to you in person.