CES 2016 - M.2 NVMe SSD's are all the rage. There are several products slated to hit the market this year and one of the drives we are most excited about is OCZ's upcoming RevoDrive 400. Rumored to be powered by a proprietary controller and 15nm MLC flash, the RevoDrive packs a punch that is sure to delight enthusiast's everywhere. 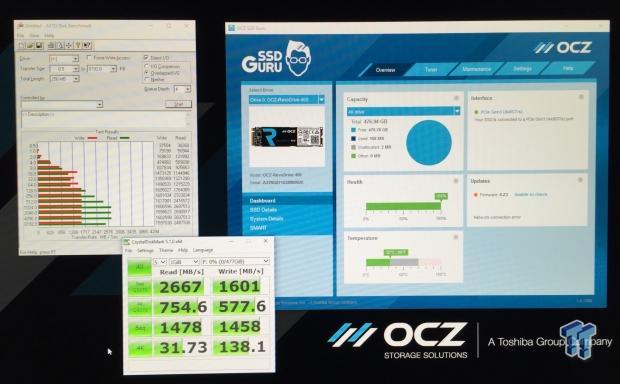 Early-adopting enthusiasts that feel held back by commodity SATA storage can't wait to get their hands-on the impending RevoDrive 400 series which was designed and engineered for ultimate next generation storage performance. The NVMe™ PCI Express Gen. 3 x4 SSD series redefines the boundaries of speed and the limitations of storage capacity with up to 2.4GB/s of bandwidth and up to 1TB on a single M.2 module.

OCZ was kind enough to give TweakTown a first look at a RevoDrive 400 512GB SSD in action. These benchmarks display an impressive 2.6GB/s sequential read performance and an equally impressive 1.6GB/s sequential write performance. Looks like the 950 Pro may have some serious competition coming soon from Team OCZ.