Fallout 4 is a pretty complex and dynamic game, and lots of gamers are stumped when it comes to the new perk system. Below we make an educated guess based off of data and speculation on how Fallout 4's perk and leveling system might work. 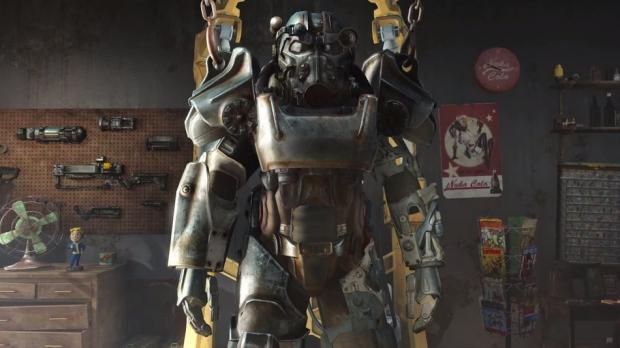 A recent OXM interview with a Bethesda rep has prompted a dizzying level of confusion in the Fallout community, leading to rampant speculation and millions of gamers scratching their heads. "You'll still level up via XP, and each level increase will still give you a point to spend on a perk, but now those perks have varying XP levels of their own," says the Bethesda employee. "It's perk-ception, essentially, and means that, should you theoretically play long enough to max out every tier of every single one gaining untold buffs and no doubt all kinds of horrendous real-world illnesses in the process - you'll top off with a total of 275."

Perk-ception? Perk level ups? How does that work exactly? Also does this mean there actually is a level cap after all? I believe the concept is pretty hard to explain in just words, and the rep was put on the spot and wasn't prepared to adequately explain the system. Which makes sense, as Todd Howard says Bethsoft won't spoil Fallout 4, and this could ruin some surprises.

Based on evidence gathered from Vault 111's Fallout 4 character builder and Reddit posts dissecting the Fallout 4 footage shown at Quakecon and Gamescom, here's how I think it works. 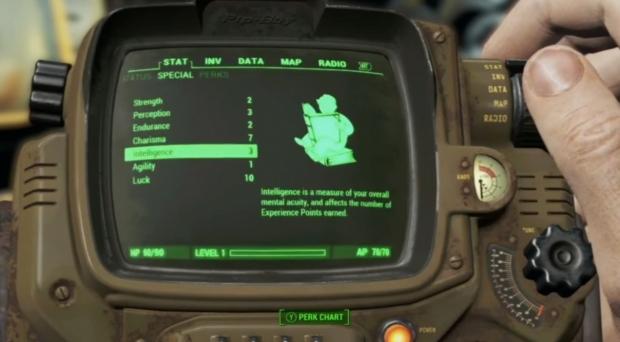 Since a "skills" tab didn't show up on the Pip-Boy, there is speculation that skills might be removed from Fallout 4. But there is also evidence that the skills will instead be involved in crafting. The role of perks now sees a kind of merged union with skills, with SPECIAL attributes at the core.

"Fallout 4 is designed to play up the importance of SPECIAL and to use it to bind with the perks to allow for a lot more variety as far as characters that you can play, the choices that you make...to make it more unique as there are so many different paths you can take," Bethsoft's PR man Pete Hines said to IGN.

The perks themselves are grouped alongside SPECIAL attributes; Strength, Perception, Endurance, Charisma, Intelligence, Agility, and Luck. Each perk from the Strength tree, for instance, will be affiliated in some way with the Strength attribute--enhanced damage, more HP, etc--whereas Agility will be AP and criticals, so on and so forth. This is the natural synergy that ties SPECIAL to perks.

But there's an inherent balance to how you choose to play. Pete Hines goes on to say that players can "go right to 10 Strength right off the bat and unlock this crazy perk and carry everything and be this sort of hulking barbarian, but you'll have to sacrifice a lot of other things in the process."

Picture it as a grid, with the perks themselves separated into individual blocks and fastened into rows. At the top is the SPECIAL attributes, and as you descend the row the perks become more and more powerful. The concept looks something like this:

The higher your particular SPECIAL attribute, the more perks you have access to. So let's say your character has 5 Strength points and just 2 Perception points. This means you get access to the first five perk blocks down the Strength column, and only the first two down the Perception column. The higher your SPECIAL stat, the farther down your perk access reaches. This is retroactive, too--at level 10 you'll get the full line of perks.

A good portion of these perk blocks aren't just one-off unlockables but instead sport multiple tiers or grades that incrementally increase bonuses by percentage. Keep in mind you're automatically rewarded the default rank 1 perk once you hit a specific SPECIAL value.

Take the picture below as an example. Having a single point of Charisma automatically unlocks the first rank of the Cap Collector perk, which boosts your cap-finding rate. In order to get to rank 2 you'll have to level up and spend a perk point. There's no need to rank up Charisma to unlock Cap Collector rank 2, as adding another SPECIAL attribute pushes you further down the column. 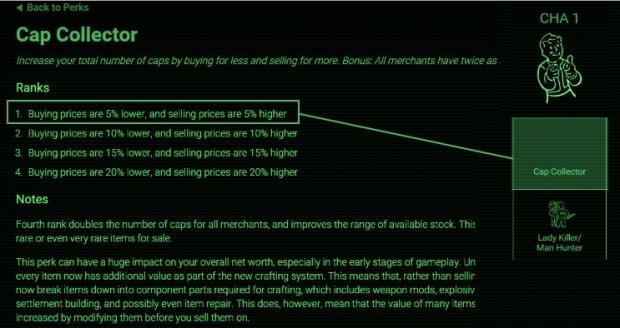 Character progression is believed to be the same as it always was in Fallout 4: kill enemies to earn XP, and level up after earning X amount of XP. Perk progression is just as linear. When you're awarded a point from leveling up in Fallout 4 you'll have the chance to either boost your SPECIAL attributes or level up a perk, and we're not sure how often you'll get a level up point to spend on progression. Hence the whole "leveling up" your perks.

At the same time there are active perks like Bloody Mess that don't have these upgrade tiers, and it looks as if the upgrade tiers will be quite varied on a perk-to-perk basis--some will have four grades and others just two.

Furthermore, we're not sure if every perk rank will cost a single level-up point or not. Perhaps the mastery ranks will need 2 or more points to unlock and also require a specific SPECIAL rating to boot. Remember that the grid is just a visual aid and doesn't actually resemble the final

So when the Bethesda rep mentioned "275 separate perk tiers" they were most likely referring to the total number of combinations of perks players can attain. Also keep in mind while Fallout 4 technically has no level cap, there probably won't be any point to leveling up further once you unlock all of the perk tiers.

Essentially Bethesda has made some key changes over the years to make Fallout 4 a more expansive, integrated experience. Players will likely find a ton of perk combos and buffs to make their characters wholly unique, and it's great to see Bethesda offer a more dynamic RPG aspect to their post-apocalyptic juggernaut. Armed with the huge perk system and time-soaking crafting, players will be busy for quite some time and it's even easier to see how the game might last 400 hours in a single play session.

We can't say for sure that this exactly how Fallout 4's perk system will turn out, and there's bound to be inconsistencies and inaccuracies. The Fallout community has been busily putting the pieces together ever since the Quakecon and Gamescom footages were leaked, using the information shown therein as a basis for speculation and extraction. While many gamers are wary about the changes, I personally like the idea of perk rankings and skills being added to the crafting system--Science and Energy Weapons could make it easier to craft, well, energy weapons, and Medicine could make Rad-Away and Medkits, etc.

We hope that this coverage has helped put the game into perspective, and as always feel free to share your own ideas in the comment section below. Oh and be sure to drop by Vault 111 to map out your character before Fallout 4 hits in November.