There's not much reason to be excited over DirectX 12 just yet, but Intel was showing off the performance and power benefits of DirectX 12 at SIGGRAPH 2014. Microsoft used its Surface Pro 2 with Intel HD4400 graphics, showing off some impressive performance improvements, with heavily refuced CPU power consumption. 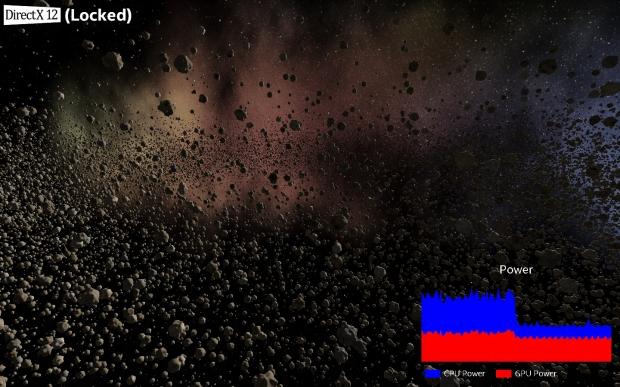 Intel had a demo that was rendering an asteroid field with 50,000 unique asteroids, each equating to 50,000 draws per frame. Each asteroid then had a unique combination of vertices, textures, and constants. Intel's demo was able to switch between DirectX 11 and DirectX 12 with a single key press, but it could also lock the frame rate in order to keep the workload on the GPU at a constant level.

The company was showing people the benefits of DX12, with massive power gains being unlocked from Microsoft's new API. Intel locked the frame rate of the demo, rendering it for a period of time on DirectX 11, and then switching over to DirectX 12. As you see in the graph above, the CPU power consumption was reduced by over 50% when DX12 was enabled, highlighting the fact that DX12-enabled games could offer some serious reductions in power consumption on our devices.

Another question Intel had, was can lowered CPU power consumption provide increased performance? The answer is yes, yes it can. Intel not only reduced the CPU power consumption, which leads to a device generating less heat, with longer battery lives on portable devices, but it allows the GPU side of things to crank up, running faster and hotter instead - providing more performance. Intel was demonstrating that by unlocking the frame rate cap on their demo, there was a 50% increase in the frame rate switching from DX11 to DX12, without drawing any extra power.