Intel is facing troubles with its schedule of its 14nm manufacturing process, however the chipmaker said that this won't affect 10nm fabrication's schedule. Intel may be under the pressure to reassure its investors as its postponed its 14nm processor production plans that was supposed to roll out from its Fab 42 plant in Arizona, USA. 10nm is scheduled for mass-production for 2016. 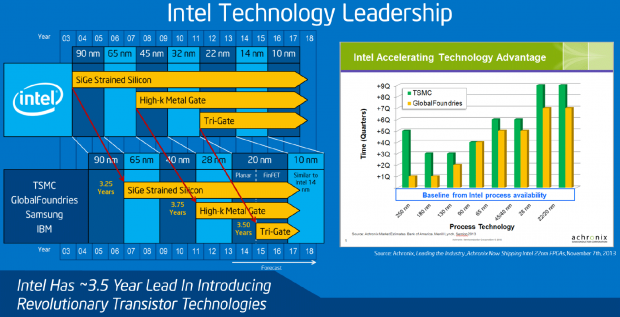 Intel's CEO Brian Krzanich said during its quarterly conference call with financial analysts and investors,"We have done no changes or shift to our 10nm schedule, but we will not really talk about 10nm schedules until next year". However, Intel didn't reveal details about the production of these chips.

This might be the reason why Intel may show-off its first 10nm wafer during the upcoming Intel Developer Forum 2014. The demonstration of these wafers should reinvigorate investor's faith in Intel's schedule and in its tick-tock strategy, despite 14nm delays. It is also rumoured that Taiwan-based semi-conductor maker TSMC is also making plans to fabricate 10nm chips, which may also pressure Intel to go ahead of schedule with its 10nm roadmap.