During the National Association of Broadcasters (NAB) Show in Las Vegas just recently, Japan's public broadcasting organization, NHK, showed off an 8K test. This test, according to Mashable, was "so dense with detail that the human eye will not detect additional resolution". 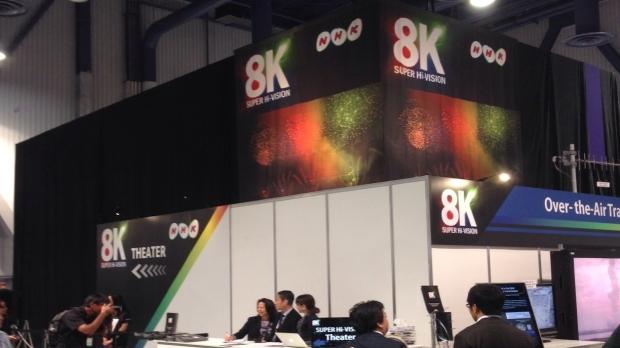 NHK was showing off some footage that included a Japanese fireworks display, a short film by a performing arts troupe, a fashion show, and footage from a soccer game between Brazil and Spain. Mashable editor Josh Dickey said that this footage looked "real" and that it was "spectacular". Dickey talked more about the 8K footage: "The clarity and depth of field truly is uncanny, yet the picture had none of the harsh edges, strange light and "video" vibe of other super-HD displays and high frame-rate demos I've seen. It's somehow cinematic; yet you can focus in on any face in a large crowd and make out every feature at varying distances. It really is like being there".

He continued: "3D is already wobbling off to international markets, and if something like 8K ever catches on here, it won't help it. During the fireworks display footage, birds that fly into the shot had me thinking some sparrows had gotten into the place. Stereovision would be overkill". When will 8K penetrate more into the market? Well, the displays and TVs have no current ETA as we need broadcasts and movies to catch up.

NHK will blast out its first 8K test broadcasts in 2016, but as usual, sports will take the lead. The Tokyo Olympics will see NHK helping out, where the Japanese broadcaster will be covering and broadcasting throughout most of Japan. NHK will also be filming the World Cup in Brazil over the summer with its beautiful 8K Cube camera, which is the size of a breadbox.