This past Thursday one of the stranger Guinness World Records was broken in Grand Rapids, Michigan. The Huffington post reported that 1,675 people showed up to LaughFest to wear their sunglasses at night, beating out the previous record of 1,642 - Corey Hart would have been proud. 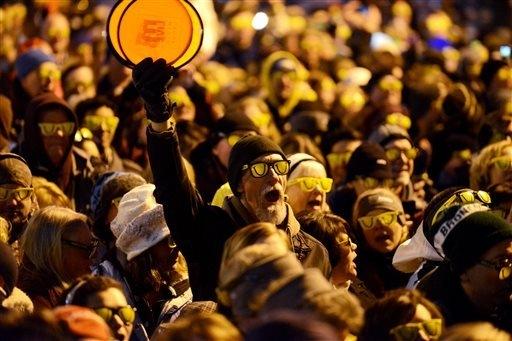 As weird as this world record breaking event is, it pales in comparison to some of the stranger world records in existence today. In January of last year, students at a New Jersey high school set a world record for the most bubble wrap being popped at one time with 366 students reportedly popping 800 yards of bubble wrap; in November of last year, Kenichi Ito broke his own record for being the fastest man on four limbs by running 100 meters in 17.47 seconds; in November of 2012, 28 women stuffed themselves into a Mini Cooper in London to break the record for the most people in one mini car; and in April of 2012, a man in China broke the record for having the most bees on a human body with approximately 331,000 bees. Is Guinness just giving world records away to anyone who can come up with anything strange enough?

Over the years, Guinness has seen such outlandish entries that many strange world record categories have been removed. Many categories relating to the world's heaviest domestic animals have been removed due to ethical dilemmas, since pet owners were purposely overfeeding their animals in order to break records. Similarly, categories like sword swallowing, rally racing on public roads, and consuming massive quantities of alcohol have been removed from Guinness World Records due to human safety concerns. And, those bizarre large foods (like the 1,325 lb. Frito pie or the 2,014 bacon cheeseburger) have a strange (albeit necessary) rule all of their own, stating that they must be entirely edible and be distributed among the public to be considered applicable to the Guinness World Record books.

What would you do to break a world record? Let us know in the comment section below.