Russia Today America anchor, Liz Wahl, resigned on air during her broadcast on Wednesday, stating that she could no longer work at the Kremlin-funded network after Russia's invasion of Ukraine.

Wahl said that she feels "many ethical and moral challenges," especially since her grandparents fled to the US during the Soviet era, "ironically to escape the Soviet Union". She continued: "Personally I cannot be part of a network funded by the Russian government which whitewashes the actions of Putin. I'm proud to be an American and believe in disseminating the truth, and that is why after this newscast I'm resigning".

Ms. Wahl's resignation comes on the heels of her colleague Abby Martin's recent comments in which she voiced her disagreement with certain policies of the Russian government and asserted her editorial independence. The difference is, Ms. Martin spoke in the context of her own talk show, to the viewers who have been tuning in for years to hear her opinions on current events, the opinions that most media did not care about until two days ago. For years Ms. Martin has been speaking out against U.S. military intervention only to be ignored by the mainstream news outlets - but with that one comment, branded as an act of defiance, she became an overnight sensation. It is a tempting example to follow.

When a journalist disagrees with the editorial position of his or her organization, the usual course of action is to address those grievances with the editor, and, if they cannot be resolved, to quit like a professional. But when someone makes a big public show of a personal decision, it is nothing more than a self-promotional stunt.

We wish Liz the best of luck on her chosen path. 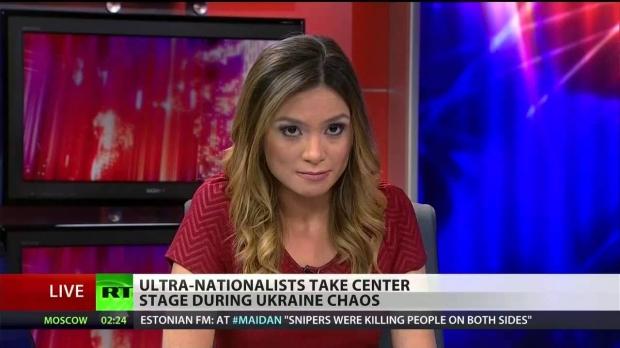