Anyone who knows me or follows my DIY/maker posts here on TweakTown knows that I am one of the biggest fans of 3-D printing that has ever lived. Since the original RepRap project began back in 2005, I have lived 3-D printing. This next tidbit of news is probably some of the most exciting I have ever reported here TweakTown.

Researchers at North Carolina State University have managed to produce an alloy of liquid metals--gallium and indium--that allows droplets to retain their shape when placed upon each other. This led to the development of a liquid metal 3-D printer. Normally liquid metal reacts the same way any other metal does when more is added, by this I mean it all congregates into a single mass.

The researchers discovered that when combining gallium and indium, the metals combined to make an alloy that forms a skin around the material. This allowed researchers to create structures by piling drops on top of each other using a very tiny syringe. Naturally, this process was automated and through the use of CNC robots, a liquid metal 3-D printer was born. 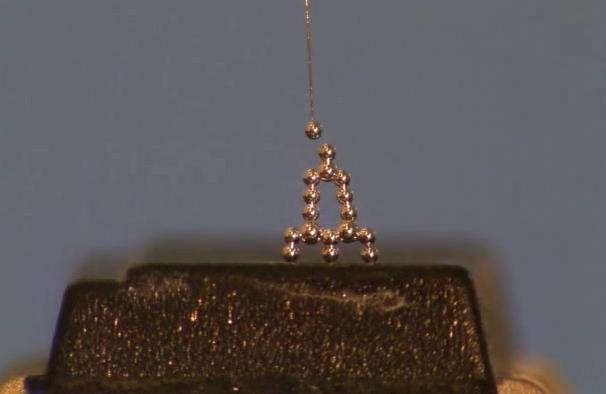 While there are not many images of the printer itself, the researchers have posted an impressive video showing off the process and how it might be used to one day rapid prototype circuits, microstructures, and maybe even real 3-D printed transistors. Unfortunately at the moment, the process is said to cost more than 100 times that of its plastic counterpart which puts it at roughly $10,000 for 5 pounds of the liquid metal.