NVIDIA has announced that they are working on building a new headquarters right across the street from their current Santa Clara headquarters. The new building's design is being worked on a team at Gensler and is being led by Hao Ko. NVIDIA says the arhitect shares their "values and drive to perfection." 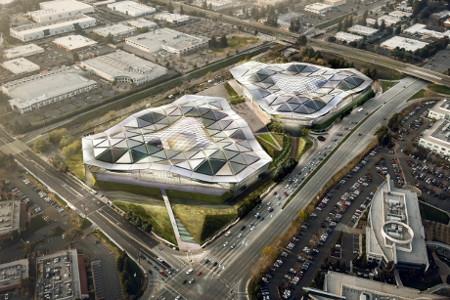 The current renders of the new building are quite awesome and could rival Apple's new headquarters. As you can see in the picture above, NVIDIA's new headquarters will be shaped like two triangles with a connection in the middle.

The design harmonizes smart functionality and a shape that connects with and inspires our employees - a triangle, the fundamental building block of computer graphics. Efficient in every way, the design is thoughtful in its use of space, energy, and environment, and, of course, cost.

Let us know what you think of the planned headquarters. I think it looks pretty nifty. You can read NVIDIA's announcement blog post on their website.