CES 2013 - Something quite astounding shown off at CES 2013 was from AMD where they had a dark room called the AMD SurRound House. The SurRound House was filled with TVs and looks like it's quite incredible to experience.

Bill Herz, Chief Multimedia Technologist at AMD, lead people into a room that was filled with 10 "windows", or 1080p-capable TVs. These TVs when added up are pushing a resolution of 10,800x1920 - I'll let you sit there for a minute thinking of that resolution - which is 20 megapixels of imaging. The resolution is pumped at 30 frames per second, which is 600 megapixels per second.

It's not all just about video, either, as audio is an equal part of the SurRound House experience. There were four speakers per TV, providing 32 channels of audio showcasing discrete digital multi-point audio. The audio is to lead the visual experience, telling your brain where to expect to look based on the audio.

All of this showcases a 2.5-minute demo of a rusty cabin, with a bunch of stuff going on - helicopters flying around and then crashing, a cow, a hostage situation, a train, and more. Herz explains that SurRound House would be great for first-person shooters, or video conferencing - and is all done from a single, multi-GPU system. 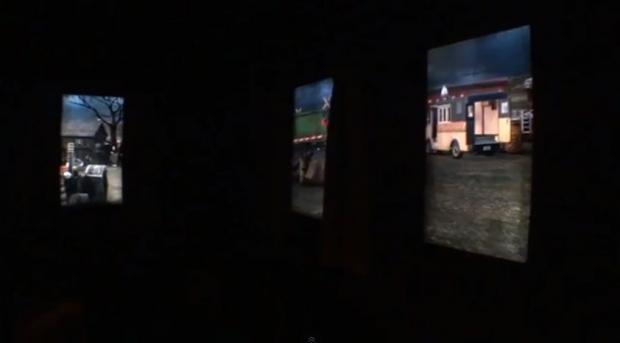 One of the guys in the crowd asked the question, where Herz replied that it was a dual-GPU system powering SurRound House. As there are 10 displays, with current AMD GPUs limited to 6 displays per GPU.