Razer's gaming-themed and feature-packed gaming laptop, Blade, is said to hit shelves and customers hands before Christmas. Razer CEO Min-Liang Tan also explains what has changed since the "world's first true gaming laptop" was unveiled in August, and talks about the Army origins of the laptop's sleek and sexy design. 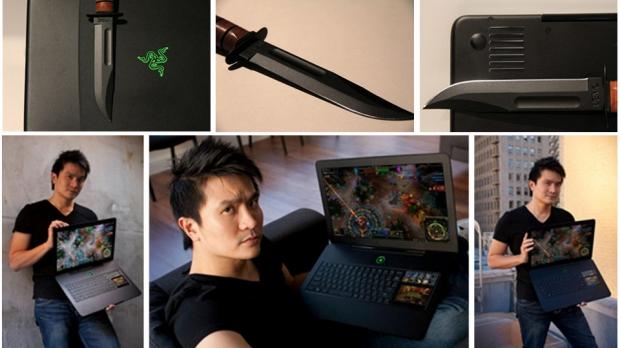 Something I did not know, is that Tan served in the Army, and is quoted:

When I served in the army, I was sent for survival training in the dense jungles of the tropics. We carried only the most essential gear and one key item in my kit was my KA-BAR combat knife. It was simple, minimalist and utilitarian - and we used it for everything from hunting, to preparing food, cutting rope and building floats. Every night after setting up camp, I would spend my time sharpening it during watch. It was one of the finest knives I've ever used - clean, cold. supremely balanced and lethally sharp.

The high carbon steel blade was matte black, cold to the touch and the beautiful silver edge was one of the images that always stuck in my mind for years.

Sounds like a man's man, and compared to me, it makes me feel like I should run off and paint my nails or something. I do enjoy the dedication to the brand, and the story behind it. Dedication is a very good thing to have. Seeing the two items (the knife and the laptop) side-by-side, we can see the inspirations that have been baked into the laptop.

Colors, the spine of the unit, and even the vents on the underside of the unit are edged in silver, like the blade of the knife. Tan adds:

This is one of the design elements I really like about the Razer Blade - most PC manufacturers have a horrible underside surface - we designed the Razer Blade to be beautiful both on the outside and inside.

What I love, is Razer have added a system start-up sound inspired by the noise of a blade being pulled across a whetstone. Again, dedication.

The pricing is still quite razer sharp, at $2799.99, but has now included a nice update to the specifications. Tan says:

Prior to the announcement of the Razer Blade, we had to deal with skeptical component suppliers who were convinced that no one wanted a well-designed gaming laptop - and that all the users cared about were cheap and mass produced laptops. To convince them to supply us, we offered a premium over their listed prices for the components.

After the announcement of the Razer Blade, they were floored with the response from the press and the community and we managed to negotiate a price down for the components. We were able to convince them to bring the cost down and with the cost savings; we decided to upgrade the 320GB HDD to a 256 SSD drive.

Can't complain about that really... for those who were ready to press the "buy" button on one, this should make that purchase ever so better.