The current injunction against Samsung may hurt their Galaxy Tab 10.1 sales in Australia, but Samsung are not letting that get them down. Samsung have attacked the launch of the Apple iPhone 4S not with words, but with super-cheap Galaxy S II handsets. By super-cheap, I don't mean 10% off, or even half price, I mean you can get them for... wait for it... $2. Yes, $2. There are no zeroes behind that, just a mere $2. 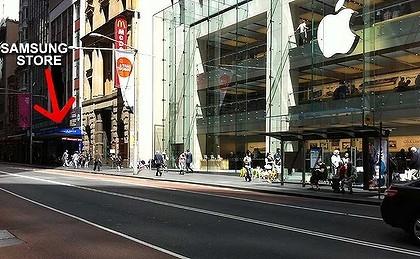 The GSII handsets are available in a temporary pop-up Samsung shop that is just metres away from Sydney's Apple Store. Literally, metres away. The catch? The first 10 in line will receive a $2 phone, those behind the first 10 will have to wait until the day is over, wait the entire night and then the following 10 will receive that day's batch of phones. Samsung this week rented a store just two doors down from the Sydney Apple Store to promote their Samsung Galaxy S II smartphone as well as their new online music subscription service, Music Hub.

It will definitely hurt Apple, as their new iPhone 4S goes on sales 8am on Friday. With the Galaxy S II being the strongest competitor (and actually still better in some aspects) it is a huge blow to Apple, especially after Samsung paid their respect to Steve Jobs and postponed their Samsung Unpacked 2011 event where they were reportedly going to unveil their next-generation Nexus handset sporting Google Android 4.0/Ice Cream Sandwich.