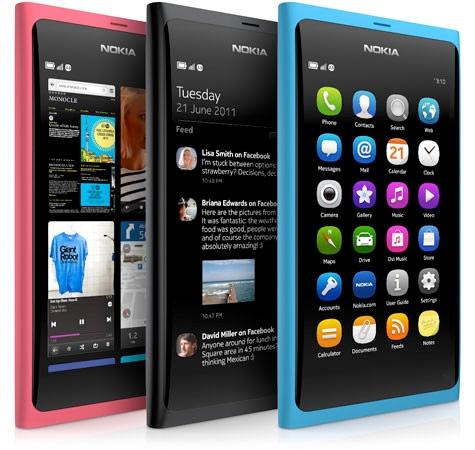 Nokia's N9 measures 116.45x 61.2 x 7.6-12.11mm and weighs 136 grams. It also packs a battery capable of lasting up to 50 hours of music, 4.5 hours of 720p video and between seven and 11 hours of voice calls. It also includes turn-by-turn drive and walk navigation with voice guidance in Maps, a dedicated Drive app, proximity sensor and a choice of hue: black, cyan and magenta.

Filling the device out is 802.11a/b/g/n WiFi, an ambient light sensor, compass, orientation sensor, a micro SIM slot, tethering support and a 3.5mm "AV connector". It'll be running MeeGo 1.2 Harmattan with apps being compliant with Qt 4.7 and HTML5 support is included.

Software is not limited at all, the N9 boasts Angry Birds Magic, Galaxy on Fire 2, Real Golf 2011 and OpenGL ES 2.0. Pinch-to-zoom support is included as are unified notifications for Facebook, Twitter and RSS feeds in the Events view as well as social networking profiles and status updates merged into phone contacts. MeeGo is powered by a user interface which is simplified into three home views - events, applications and open apps. A simple swipe gesture is able to take you back to the home view.
NEWS SOURCE:engadget.com