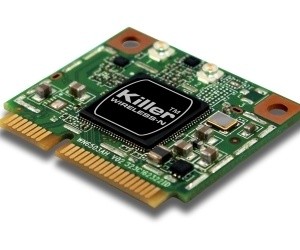 Bigfoot says this will give laptop gamers an advantage over opponents who don't have a comparable networking kit as it cuts down on latency and lag. Bigfoot Networks' CEO Michael Howse also said that other wireless connections that are usually unsuitable for other online activities that are sensitive to wireless packet loss such as VoiP and HD video streaming would benefit from these new Bigfoot products.

He went on to say "with our innovative networking technology and advanced 802.11n hardware, Killer Wireless-N adapters not only accelerate performance for online games, they also reduce stuttering, excessive buffering and other annoyances in video chat and on-demand entertainment services."

In order to achieve this level of performance, the card uses a number of clever range-enhancing 802.11n technologies to maximize the bandwidth available to the PC, which Bigfoot developed itself.
NEWS SOURCE:bit-tech.net