The great big world piracy community has found a hole in the activation routine that has allowed them to activate Windows 7 before it is even released. While there are sites reporting this today it actually started a about four days ago when the first pair of Windows 7 Activators, the Windows 7 Activation Tool Kit Beta 1.8 and Windows 7 Loader, hit the internet. Of course they spread rapidly so that people with the RTM image would be able to use it fully activated.

While all of this is noteworthy, it is not unexpected or surprising. After all; there has to be openings in the activation routine for MS to work with and around it for large OEMs and VARs. This was the same vector that the older Windows Vista Loader used. It fooled Vista into thinking the system was from one of a list of manufacturers that can activate by BIOS image.

Of course that hole was patched with the release of Vista SP2, but like jailbreaking the activation hacks are a game of cat and mouse. 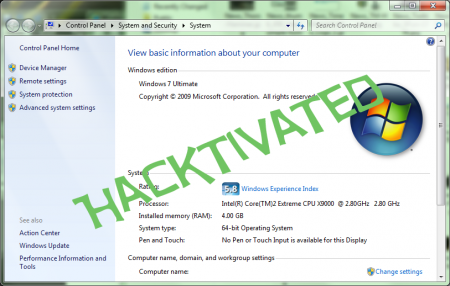