It was roughly a year ago that Mushkin released their 8800GT onto the public. And now are getting a bit more serious about this side of the market.

Mushkin has announced a complete lineup now including the GTX 260, 275 and GTX 285. Mushkin will also push out an overclocked GTX 260 and 275. The new cards will sell under the name of ultimateFX and will come in what looks like a wooden Cigar Box.

No word on price and only time will tell if these cards will make it in the market. 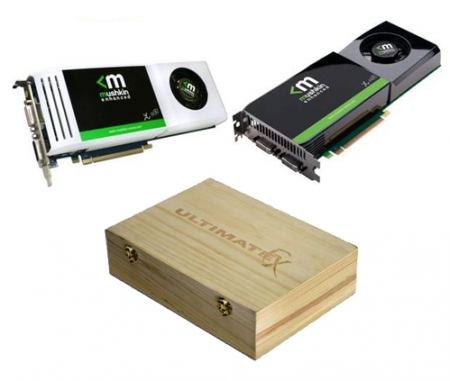 A while back, or to be precise, in January last year, Mushkin has announced its first graphics card, the Geforce 8800 GT XP. As of today, it looks like Mushkin is getting more serious about this part of the market and has announced several Nvidia based cards ranging from GTX 260 to GTX 285 with promise of Overclocked and GTX 295 that should be announced soon.

As far as we could tell, a new Mushkin branded cards are all based on Nvidia's reference design, but it appears that Mushkin is also doing an overclocked cards branded as OC and OC2, brands already seen at BFG. The new series is called ultimateFX and will be delivered in a WoodBox, which is a box made of wood, just in case you wondered.