This board which will be called the P6T7 WS Supercomputer, is related to the amazing P6T6 WS Revolution. It will have a whopping four x16 PCI-E slots and three x8 Electrical slots.

Other specifications are similar to the P6T6 WS.

Pricing is not mentioned but with the P6T6 WS running at almost $400 you can bet the P6T7 will be quite expensive. 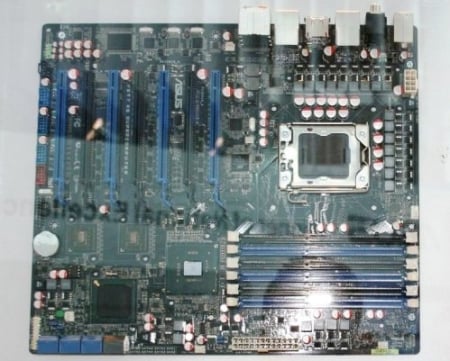 The ASUS P6T7 WS Supercomputer is a newly announced X58 motherboard that sports no less than seven PCI-E 2.0 slots controlled by two nForce 200 SLI chips. More specifically, four of these slots are x16 and three are x8 electrical, and 3-way SLI and CrossFire are also supported.

Additional features of this board include six memory slots for up to 24GB of DDR3, six SATA II ports, two SAS ports supporting RAID 0, 1, 10, two eSATA ports and the usual 7.1 onboard sound and dual Gigabit Ethernet.

Obviously, this board brings some optimistic hope for Folding@home enthusiasts, as it has been said to be the "best choice for intensive parallel computing demand."