All NewsBusiness, Financial & LegalCases, Cooling & PSUContests & GiveawaysCPU, APU & ChipsetsDealsDisplays & ProjectorsGamingMotherboardsScience, Space, Health & RoboticsStorageVideo Cards & GPUsVirtual & Augmented Reality
All ReviewsAll ArticlesAudio, Sound & SpeakersCases, Cooling & PSUCPUs, Chipsets & SoCsComputer SystemsDisplays & ProjectorsGamingMotherboardsNetworkingPeripheralsRAMStorageVideo Cards & GPUs
GuidesGamingAsk the ExpertsNewsletterAboutPrivacyForums
AMD Zen 4Intel ArcBattlefield 2042RTX 3090 TiRTX 4090RTX 4080GTA 6Elon MuskHDMI 2.1
Expreview has gotten hold of some photos and details of another Quantum Force series motherboard almost ready to be unleashed from Foxconn. As it's based off Intel's P45 chipset for Core 2, it's a bit of a shame Foxconn couldn't get this particular board to market much sooner, what with Nehalem now stealing much of the enthusiast light. 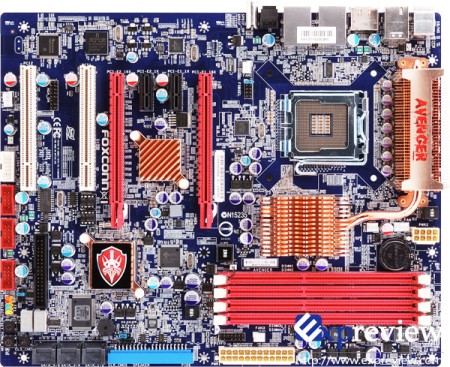 Dubbed the 'Avenger', this isn't just your run of the mill P45 offering; it's quite a special board and can do something no other P45 chipset board out there is capable of. If you look between the two residing x16 PCI-E slots you will see a lone chip nestled in there. This is in fact a PLX chip; the same chip used on the ATI HD 4870 X2 graphics cards. What it does for this board is provide dual x16 Crossfire across both slots, where standard P45 boards are limited to x8/x8. 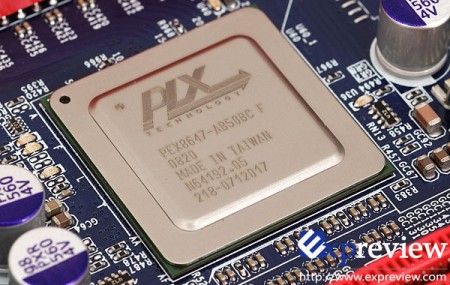 Many enthusiasts and overclockers out there swear by P45 as it's been known to clock quite a bit better than its bigger brother, the X48, just as P35 was known to reach higher FSBs than X38 in a lot of cases. The downside was the lack of bandwidth available in Crossfire configs, but now you get the best of both worlds with the Avenger; hooray to Foxconn! 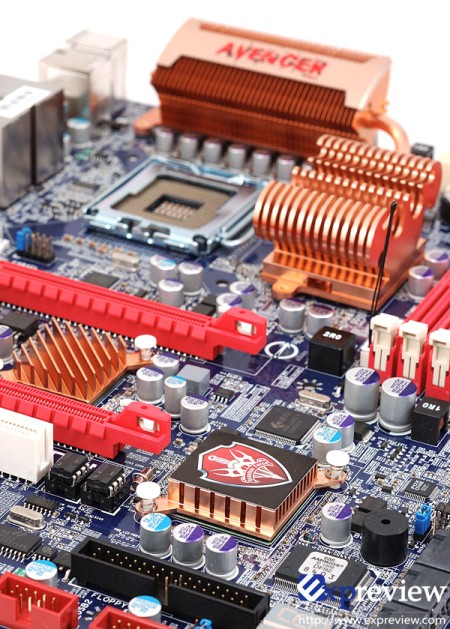 Foxconn didn't stop there, however, they have also moved the Northbridge up higher beside the DDR3 memory slots and LGA775 socket which has been turned 90 degrees. This is said to decrease latency times between the data links and technically there could be some truth to it, but it will be interesting to see if benchmarks pick up on this tweak.

The board is said to provide power to the CPU using an 8-phase digital PWM, though the accompanying images don't seem to depict this. We'll know about the board in the coming weeks as Foxconn gears it up for launch.
Newsletter Subscription