I decided to cover an affordable mainstream GPU this time, as more and more people are looking to save money by overclocking mainstream parts to the performance levels of high-end products. Many mainstream parts are just cut down versions of their high-end brethren, and the GTX 750 is no exception. Today I am looking at the MSI GTX 750 1GB Gaming (non-TI). 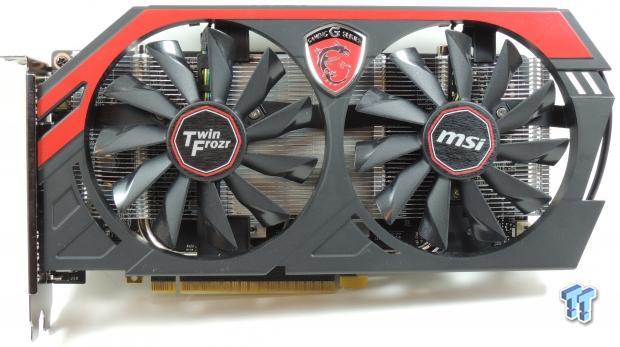 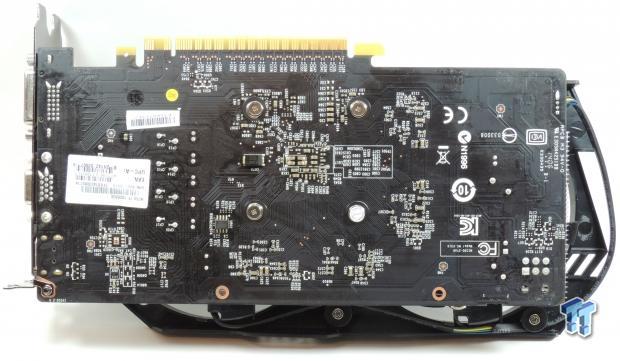 MSI is one of the best known brands for gaming GPUs, and it is no surprise they are able to churn out really appealing video cards, generation after generation. Recently, MSI has focused heavily on their gaming series, which is a really nice thing in my opinion, since it makes it easier to match their GPUs to their boards.

MSI decided to toss a very nice cooler onto their GTX 750, which features TwinFrozr IV technology. As far as stock clocks go, this GTX 750 features a 1059MHz core with 1137MHz boost, and a 1250MHz memory clock.

PRICING: You can find the MSI GeForce GTX 750 Gaming OC 1GB GDDR5 VGA/DVI/HDMI PCI-Express Video Card N750 TF 1GD5/OC for sale below. The prices listed are valid at the time of writing but can change at any time. Click the link to see the very latest pricing for the best deal. 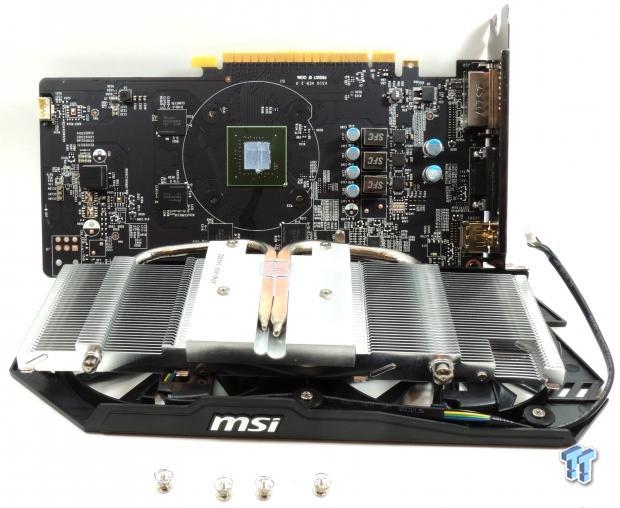 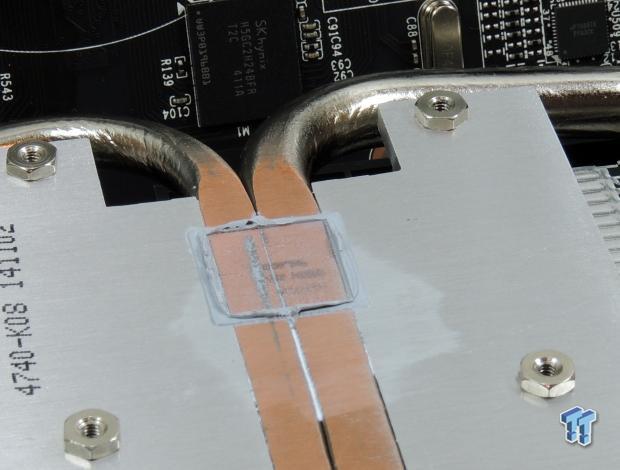 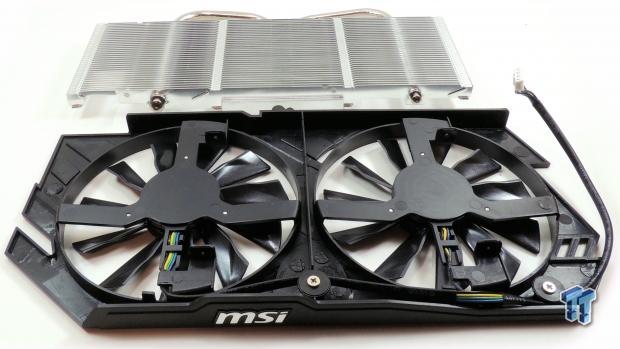 Contact is so good that the lettering from the core is mirrored on the heat pipes, even after removal. The paste is also evenly spread, which is a good thing. The fan assembly is held to the heat sink by four screws, and this is one of the nicer aluminum heat sinks I have seen on a GTX 750/GTX 750 Ti. 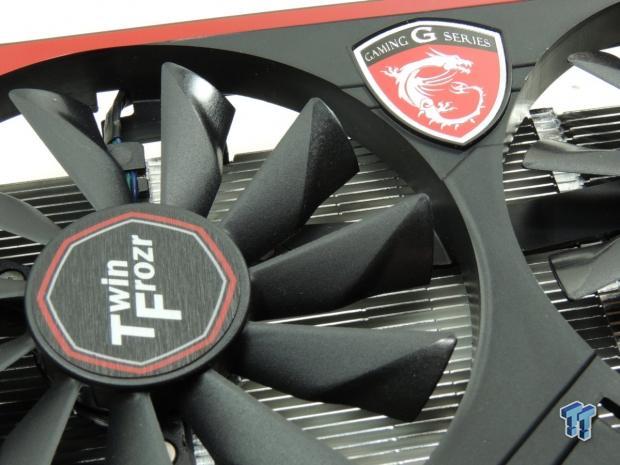 The blades on the TwinFrozr fans are angled to increase airflow. The attention to detail here is superb.

This is the view of the GPU when it is installed in a case. You can clearly read "MSI." 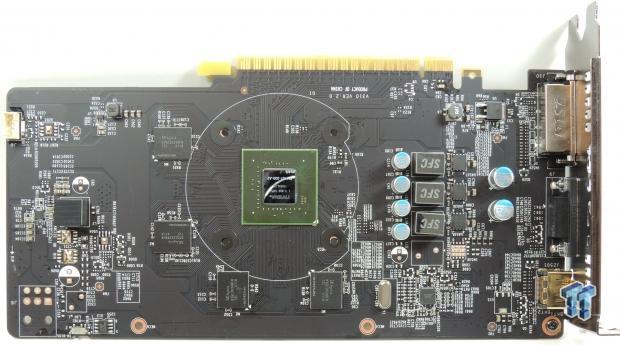 While the TDP of the GTX 750 is only 55W, the VRM is still an important part of product quality, and will play an important role in longevity. The MSI GTX 750 doesn't even have a six-pin power connector, but it also doesn't really need it considering its extremely low power usage. 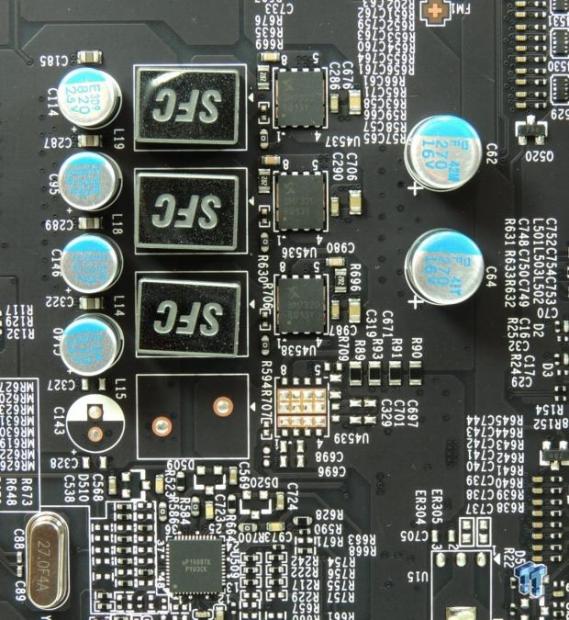 The main VDDC (Core Voltage) of the GPU is provided by a total of three high current phases controlled by a uPI UP1608 PWM, and powered by SinoPower SM7320ESQG Dual N-Channel PowerPAK MOSFETs. The UP1608 features three or four phase operation. Three phases are supported by integrated drivers, and if you want to add a fourth, you need an external driver; in this case, three phases are used. There seems to be extra PCB space for a fourth phase, but considering that the standard GTX 750 only has two phases for the core, three phases of this quality are more than enough. Each phase can push 25A under normal conditions according to the datasheet on the MOSFETs.

The parts in this VRM are much higher quality than one would expect on a GPU of this price. The inductors are top notch, and the capacitors are also solid polymers. There are a four 820uF capacitors for a total of 3280uF. 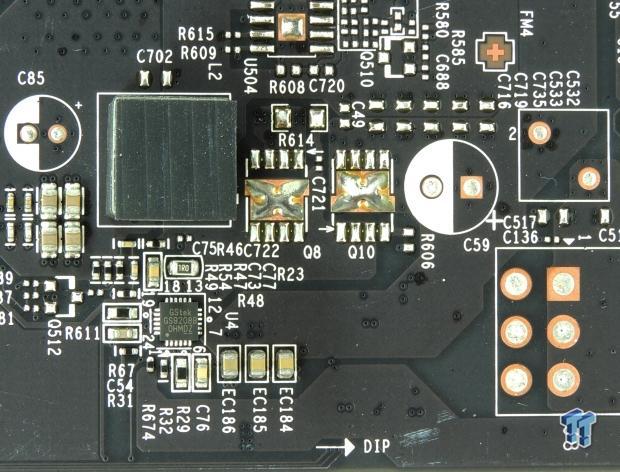 The memory VRM is a single integrated phase - a fully integrated buck converter. The GSTek AIO GS9208B can provide up to 10A of power with its integrated MOSFETs, which is more than enough for the 1GB of GDDR5. 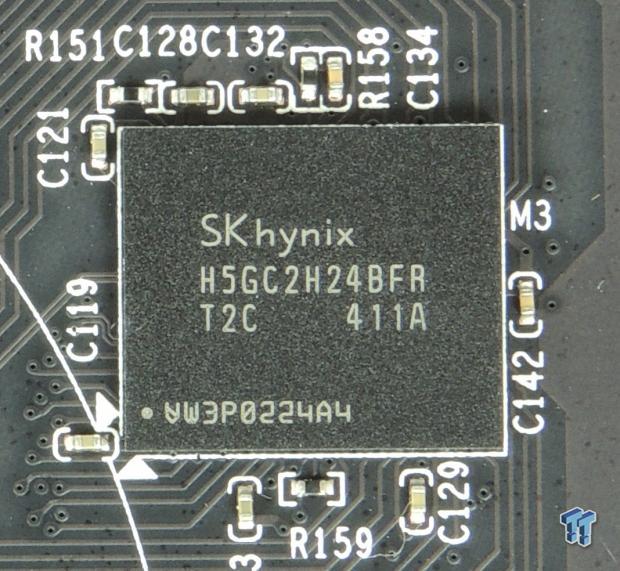 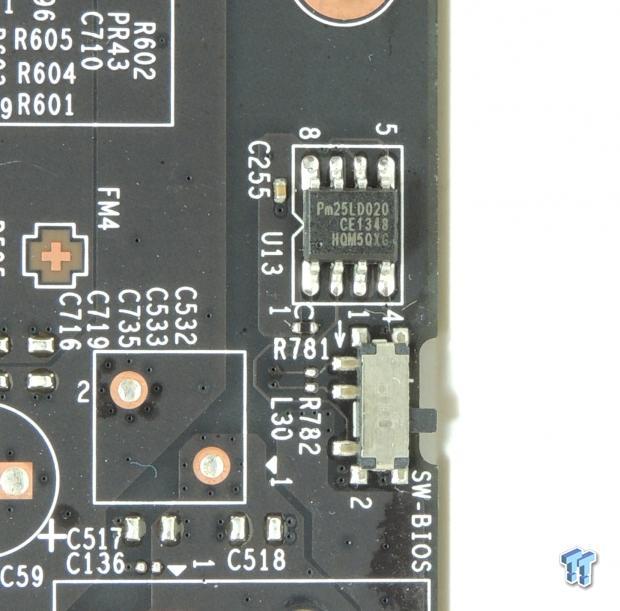 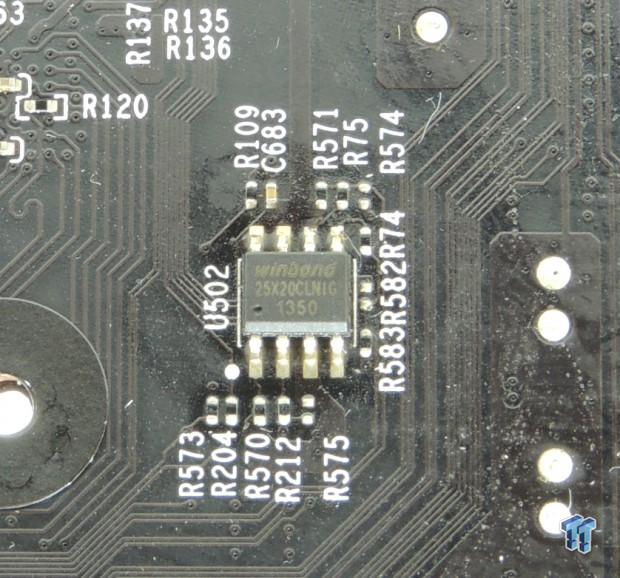 Here is where things get a bit tricky: there is a switch on this card for BIOS selection. One BIOS is for legacy operation in older systems, and the other is for UEFI. Both are 2Mbit BIOS ROMs, only position two worked for me (as only one position should). This allows this card's BIOS to be compatible with older systems. 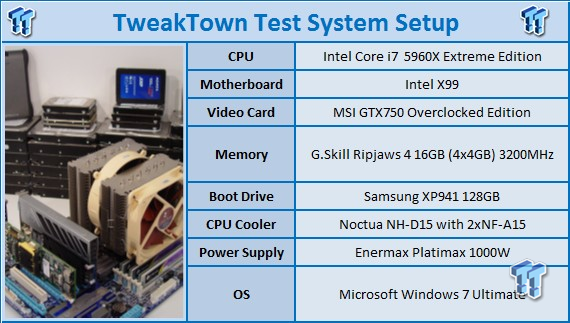 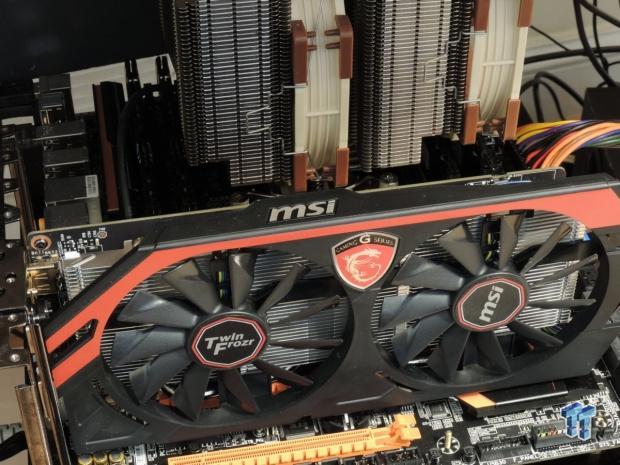 The card is basically full length, and doesn't look like a mainstream gaming GPU; instead, it looks like the high-end performance tuned cards, which is the appearance many people prefer. I had no spacing issues. 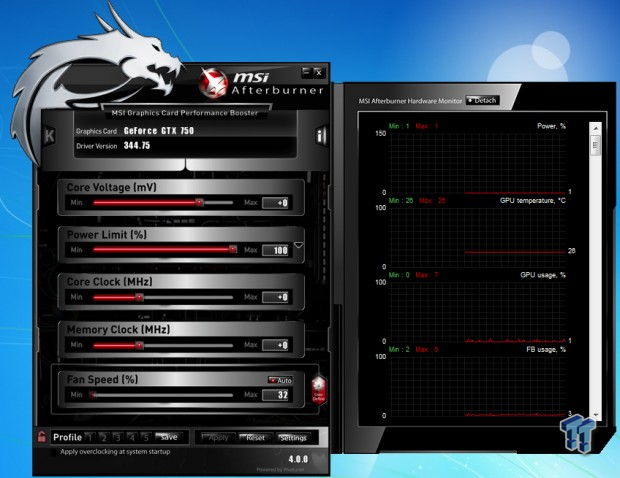 MSI is the company behind Afterburner, the preferred GPU OC software for many around the world, including myself. It is constantly updated, and has features needed for overclocking. It also has many skins, including this nice MSI Gaming skin. 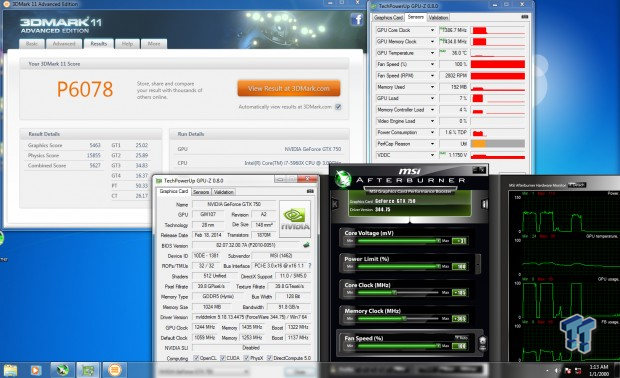 I was able to increase my 3DMark11 score by over 700 points, which is a nice overall increase in performance. Overclocking the core on this card is very simple; the memory seemed resistant to going higher than 1435MHz, and artifacts appeared with anything above. If I went higher than 1385Mhz on the core, then the driver crashed every time. However, these are still big increases over the stock clocks of 1137MHz core and 1250Mhz memory. The memory is clocked 100MHz lower on the GTX 750 than on the GTX 750 TI, but with overclocking, we can easily increase its speed. 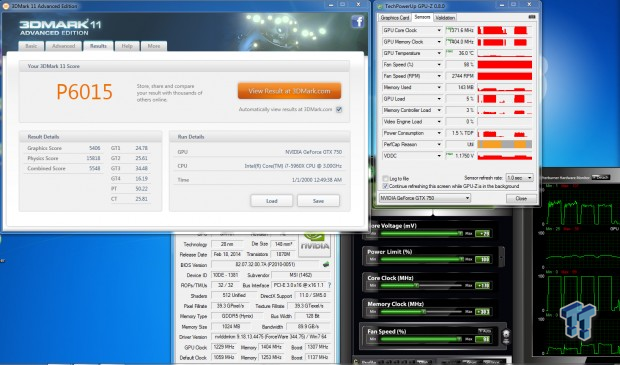 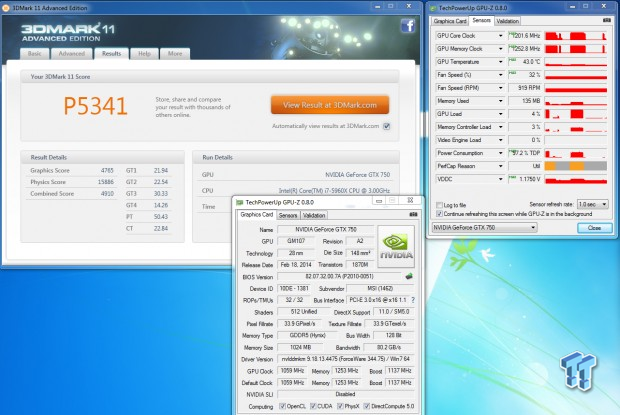 I have the card at stock and with a mild OC in the images above. I would first recommend finding a nice core clock, and then working on memory with this card. 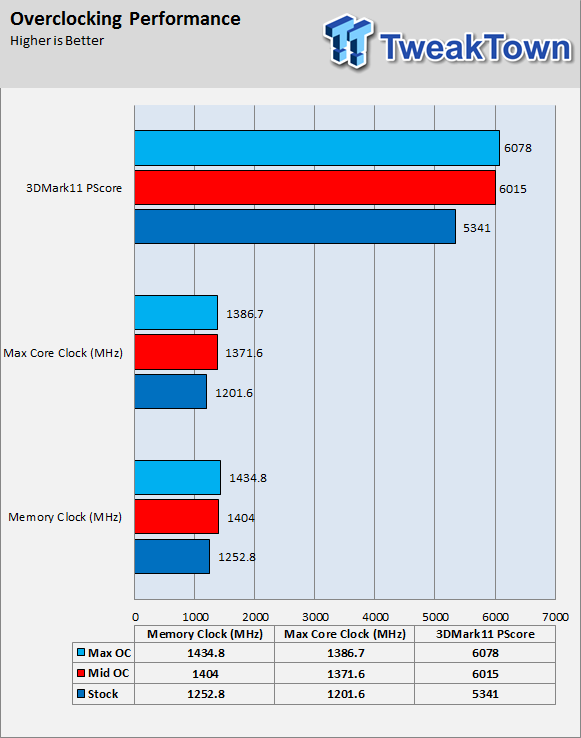 Here you can see the 3DMark11 scores at different GPU speeds. 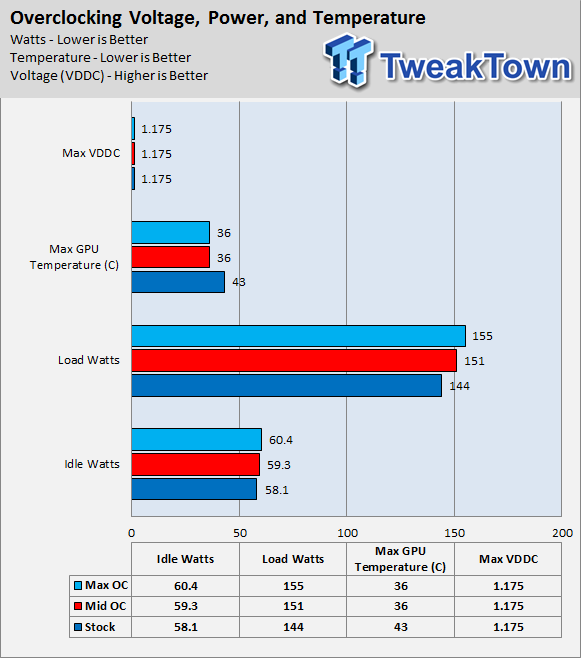 This chart displays the other variables involved in the overclocks, including the maximum GPU core voltage (VDDC), idle and load total system power draw, and GPU core temperature. I did not overclock the rest of the platform for these tests, as the platform wasn't bottlenecking the system. I measured maximum power draw during GPU test two. 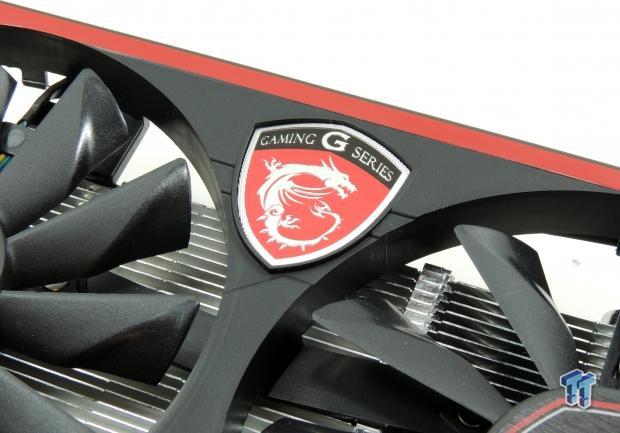 MSI is known for making some of the best GPUs on the market today, and this GTX 750 did not disappoint. It is not only extremely power efficient, but it is also a pretty good overclocker. While I wasn't able to match the performance of an overclocked GTX 750 Ti, I was able to get the card to levels where gaming would be acceptable on a 1080P monitor.

The MSI TWIN FROZR IV N750 TF 1GD5/OC is currently $139.99 on TigerDirect, before rebate. Its cooler is very nice - better than many factory overclocked GTX 750 TIs. One thing that really stands out is MSI's attention to quality and detail. The VRM circuit is of great quality, and this GPU would go great with a MSI Gaming series motherboard.

This is a card for more power conscious individuals; it is meant to allow you to play games without boosting your electricity bill through the roof. The card's aesthetics are not only pleasing to the eye, but its value is also easy on your wallet. So, if you are in the market for a low power GPU that you can actually play games with, then take a look at the MSI GTX 750 Gaming.

PRICING: You can find the MSI GeForce GTX 750 Gaming OC 1GB GDDR5 VGA/DVI/HDMI PCI-Express Video Card N750 TF 1GD5/OC for sale below. The prices listed are valid at the time of writing but can change at any time. Click the link to see the very latest pricing for the best deal.