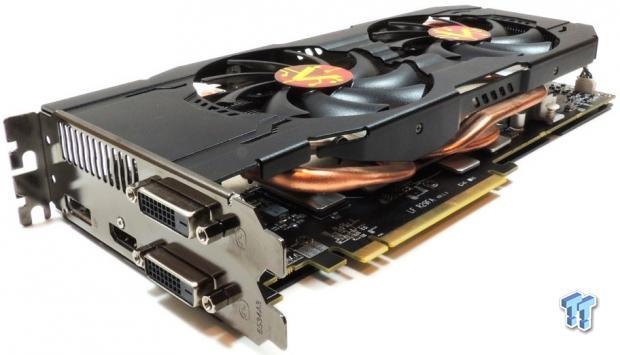 VisionTek is a provider of AMD video cards, and specializes in their products and delivery primarily inside the United States. VisionTek not only offers the basic AMD lineup, but they also really spice up their extreme high-end offerings with built-in water cooling blocks, and even kits to water cool their customized video cards.

This type of commitment to the ultra-high-end really makes VisionTek shine in a way other graphics vendors don't typically shine. Today I will look at one of VisionTek's consumer level video cards with a really hefty cooler, and take it through my process of analysis. 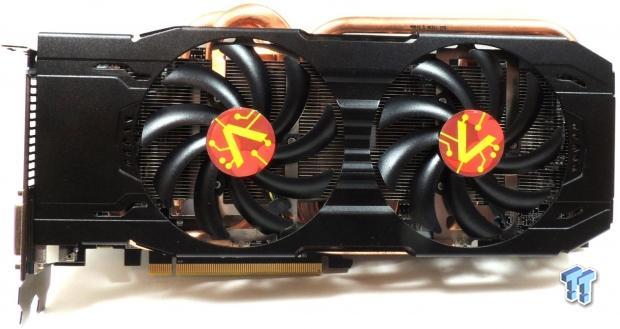 The VisionTek R9 290 features the AMD Hawaii GPU, and is basically a standard R9 290 4GB card in terms of what features it offers, including the GPU and memory clocks, which are stock at 947MHz on the core and 1250MHz on the memory (5000MHz GDDR5 effective). However, many manufacturers have taken to upgrading the heat sinks, as AMD has locked down much of the voltage control of these GPUs.

VisionTek has done a really nice job in this regard, the heat sink utilizes some really huge heat pipes, and there are two fans on the radiator. Not only does VisionTek provide a really hefty cooler, they also provide a backplate for extra protection. R9 290s aren't cheap products, and thus this level of protection shows how much VisionTek cares about its products' endurance. The backplate also gives it a nice look considering GPUs' sit upside-down in most cases.

PRICING: You can find the VisionTek R9 290 for sale below. The prices listed are valid at the time of writing, but can change at any time. Click the link to see the very latest pricing for the best deal. 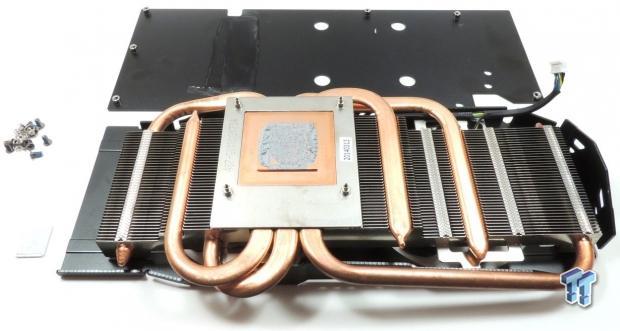 The CPU heat sink is held in place by four screws, and features three huge heat pipes, which attach to aluminum fins at three different heights, spread out evenly across the fins. The protective backplate also acts as a heat sink. Two fans provide cooling power, and at full speed they are powerful, yet noisy; however, not as noisy as the standard AMD blower fan. 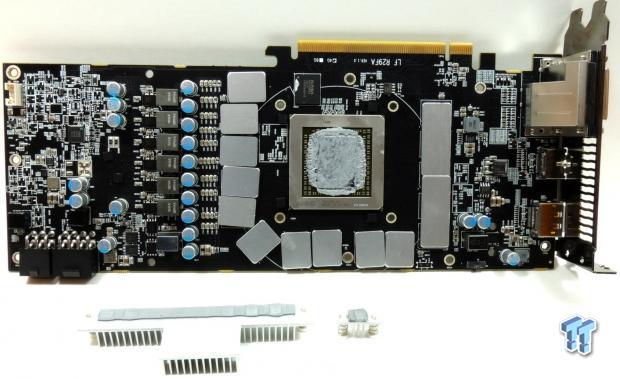 The GPU, Memory, and VDDCI VRMs are all cooled by their own aluminum heat sinks, attached by plastic pushpins. As you can see in the first image, they are attached, and the second image shows them detached. Each memory module is also individually cooled by its own heat sink, attached by adhesive tape. 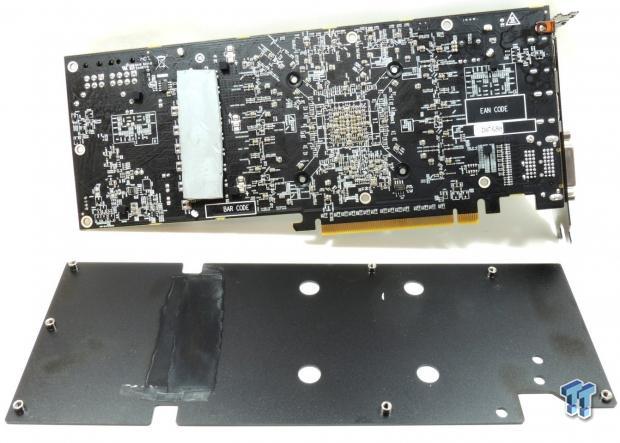 There is a very large back plate on this GPU, and it is connected by screws to the PCB. There is a very large thermal pad, which should provide decent cooling to the backside of the PCB; it is attached exactly opposite to the main GPU's VRM to cool the VRM through the PCB.

Graphics processors use ample amounts of power; in fact, they use even more power than modern day CPUs. The TDP of a 5960X is 140W, while the TDP of the R9 290 is 275W; this means that the VRM on the R9 290 must be ready for the challenge. So, let's take a look at what VisionTek is offering. 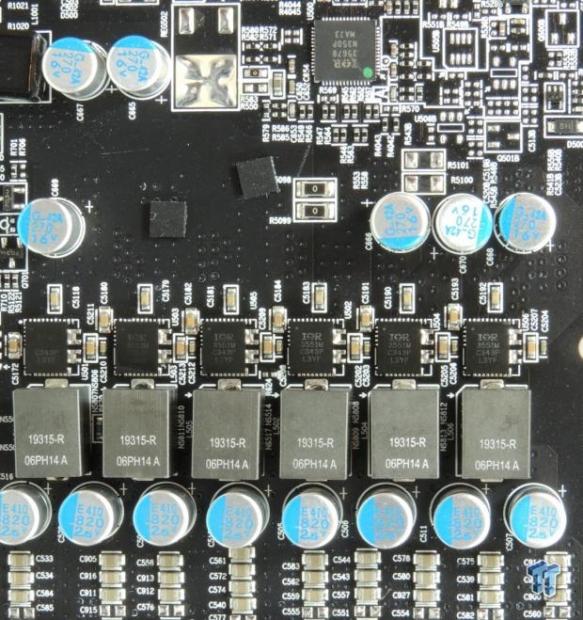 The main VDDC (VCore) of the GPU is provided by a total of six high current phases, consisting of an International Rectifier PWM, as well as six International Rectifier IR3551 PowIRstages. The IR3551 are 50A all-in-one power stages, which output higher current at over 90% efficiency. They are well known in the motherboard arena, and they have also made their way over to the GPU scene. The standard R9 290 from AMD uses DirectFETs (also from IR), and these should be equal or better, considering the PowIRstages use DirectFET technology to produce such high current output. 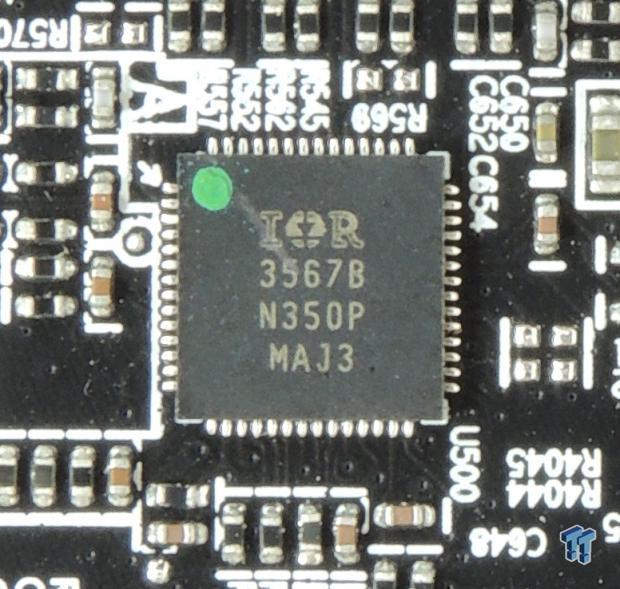 An International Rectifier IR3567B fully digital PWM is in use. This PWM features a 6+2 phase output with a variable gate voltage feature. The +2 phases are only being utilized as +1 in this case for the VDDCI, which is the voltage for the IO bus between the GPU and the memory. Since the VDDC and VDDCI power stages are all IR3551, there is no need for drivers since they are integrated into the IR3551. The use of the IR3567B for these two VRMs means you get real-time monitoring through GPUz. 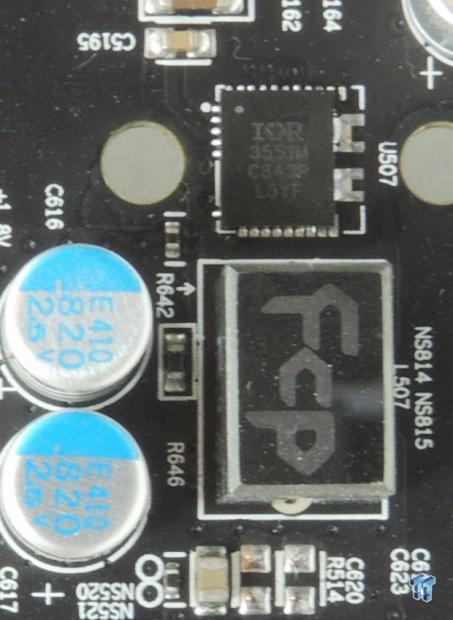 This is a single-phase that powers the VDDCI, which is the voltage for the CPU and memory IO bus. This voltage is important, and has increased in importance over time, replacing the PLL as the 3rd largest output VRM on the GPU. 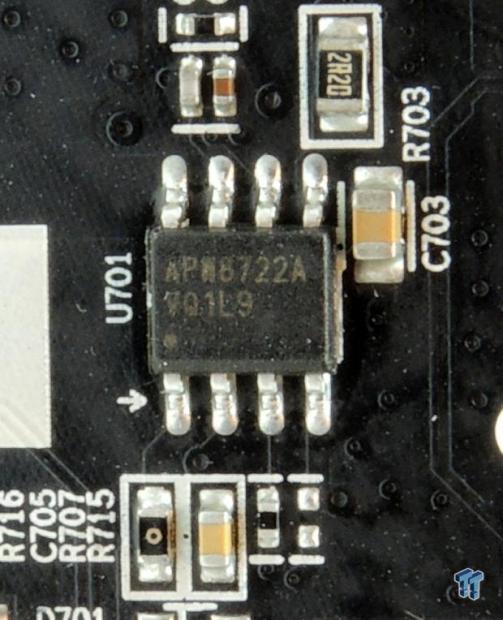 The GPU memory VRM is made up of a single powerful phase. It is controlled by an APW8722 single-phase analog PWM. It uses four MOSFETs in a redundant array. There are a total of four MOSFETs; two NTMFS4983 are the low-side MOSFETs, and two NTMFS4C08 are the high-side MOSFETs. 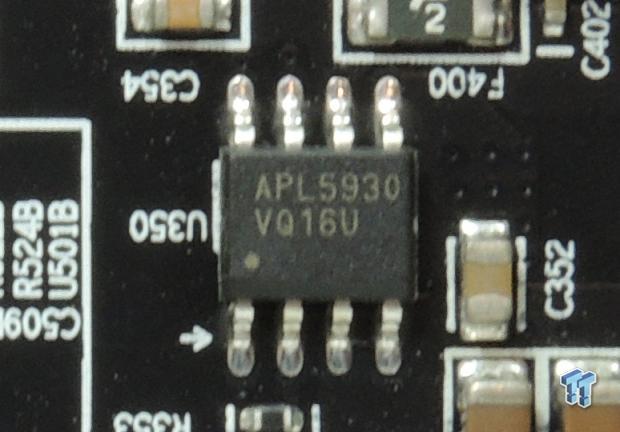 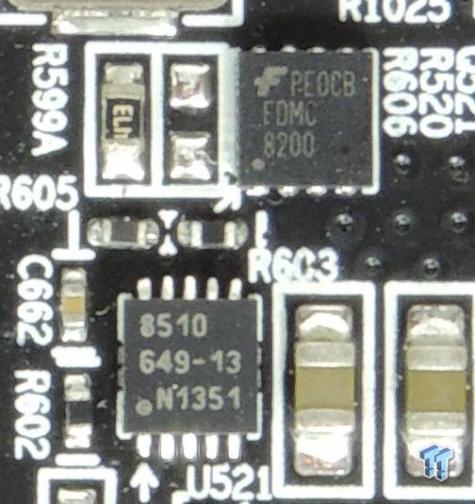 An APL5930 is used as a linear regulator, which controls the 0.95v input rail voltage. There also seems to be a Variable Gate Drive circuit that is specific to CHiL/IR PWMs. The IR3567B has a variable gate drive circuit option, which enables the PWM to control the MOSFET gate voltage. The second image shows an International Rectifier CHL8510 driver, and a Fairchild Semiconductor FDMC8200, which are both dual N-Channel MOSFETs for a VRM.

Since most everything is in the GPU these days, there are only a few components left on the PCB, and the BIOS is one of them.

This is the BIOS switch. If you happen to come across another BIOS for the card, you can switch to select it. If your BIOS flashing fails, you can always switch to the backup BIOS. 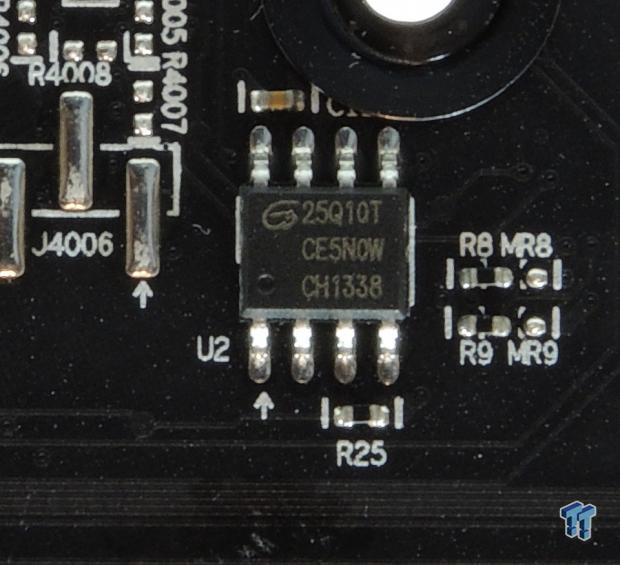 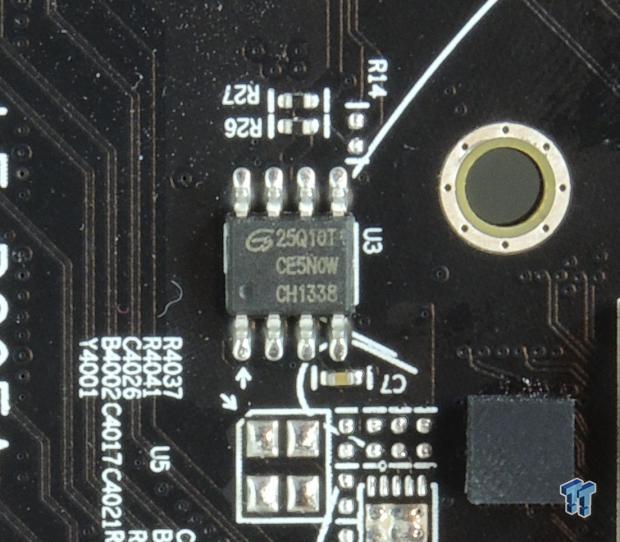 These are the two BIOS chips; they are opposite each other on either side of the PCB. 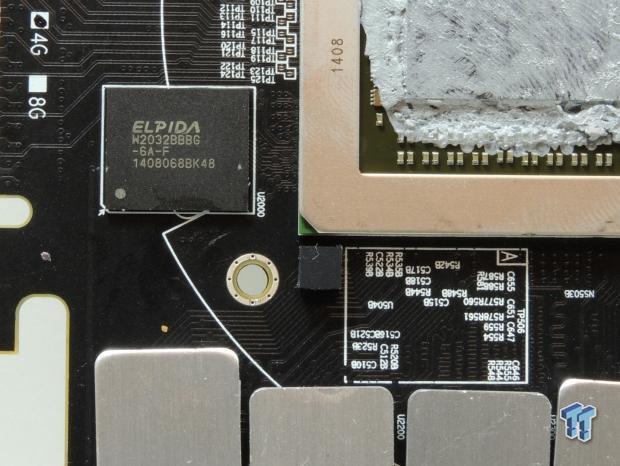 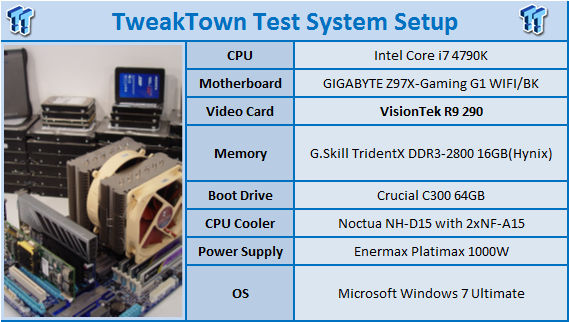 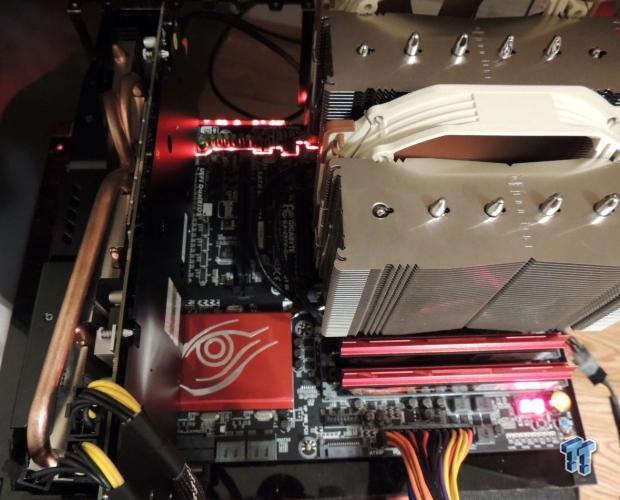 The card doesn't fit correctly in the first slot on my motherboard while using the Noctua NH-D15, so I used the Z97X Gaming G1, which can also give it full 16x in the 3rd PCI-E slot. This isn't a defect of the GPU, but rather of the cooler and motherboard. There is a slight delay that the PEX8747 bridge chip causes due to the motherboard, so your scores may be higher than mine. For my overclocking tests, I overclock the CPU to 4.5GHz, set the memory to XMP, and uncore to 42x; this should remove some bottleneck from the CPU and system memory. 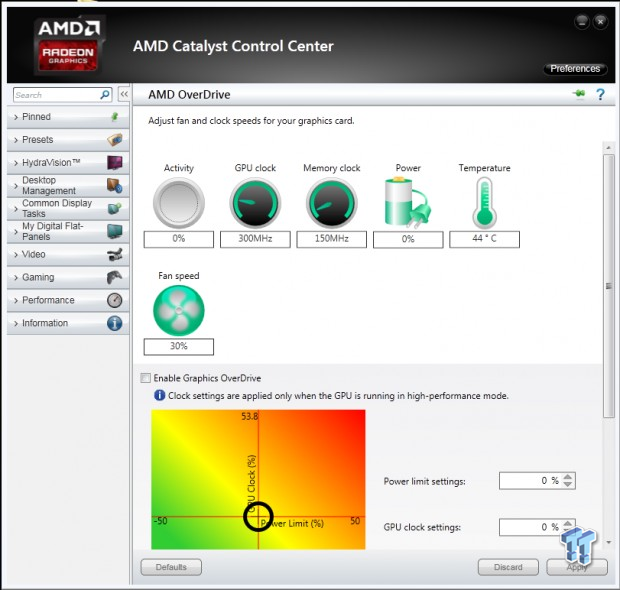 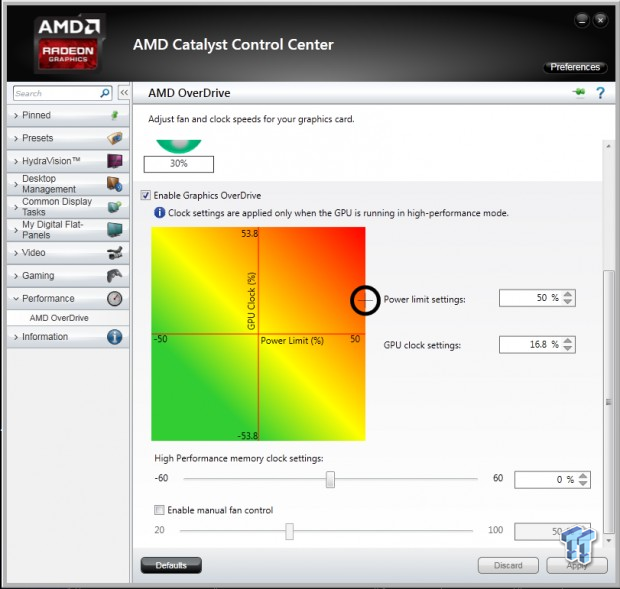 VisionTek didn't have any proprietary overclocking software; however, it doesn't really need it considering all the overclocking options available for the standard R9 290 are available in AMD's OverDrive software inside the Catalyst Control Center. AMD has locked down voltage control on the R9 290, but max power limit control is available, as is GPU and memory clock. If you are wondering about other GPU overclocking programs, let me put your mind at ease: they work just fine with this card. 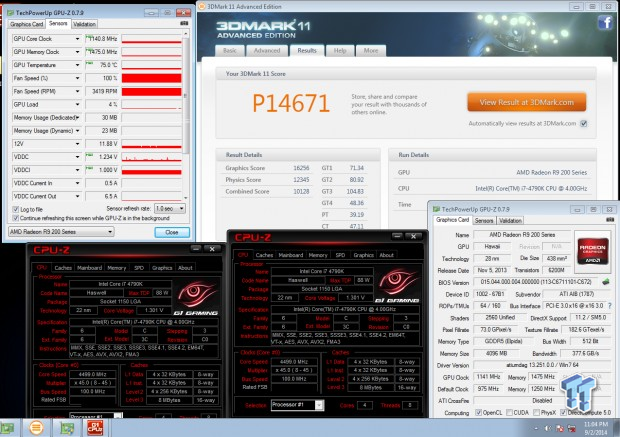 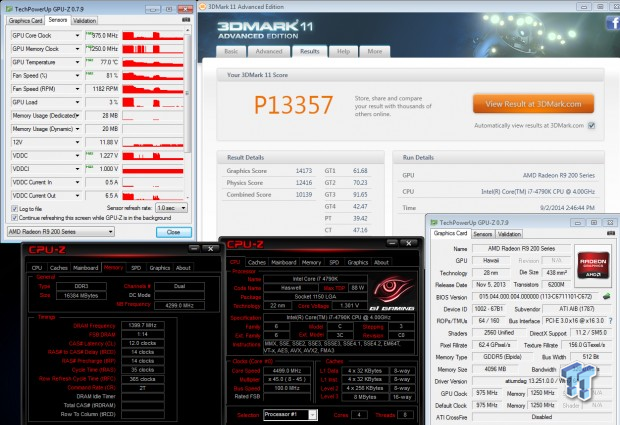 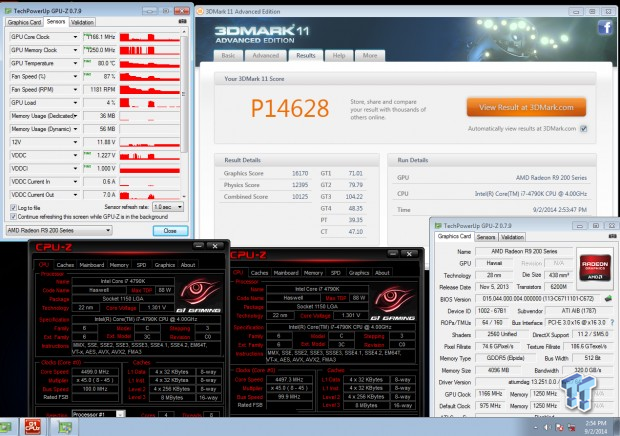 AMD has built-in boost overclocking for its GPUs, so if the core temperature is reasonable, then the GPU core can boost its clock; in this case, a 28MHz boost in clock speeds, resulting in a 975MHz core overclock. We also overclocked the GPU core, and not the memory for comparison. 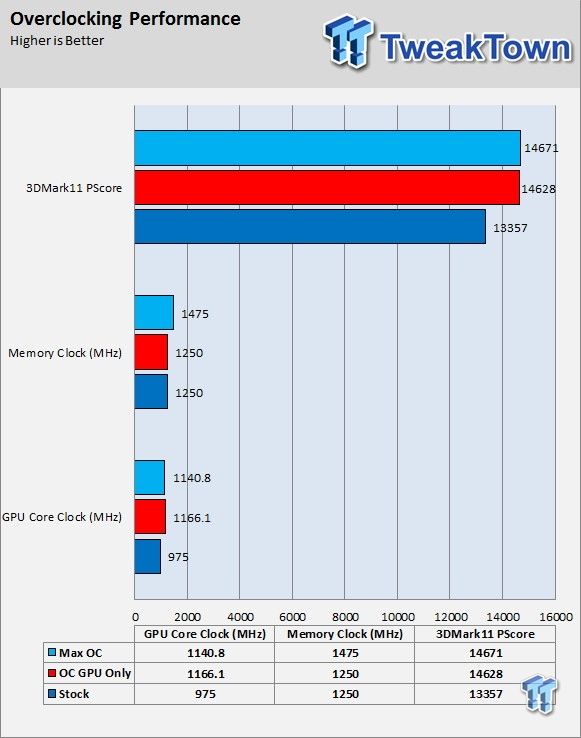 This shows the GPU Core and Memory frequency of each of the aforementioned overclocks, and their 3DMark11 P-Score at the "Performance" level preset. This will allow you to compare the increases in performance. 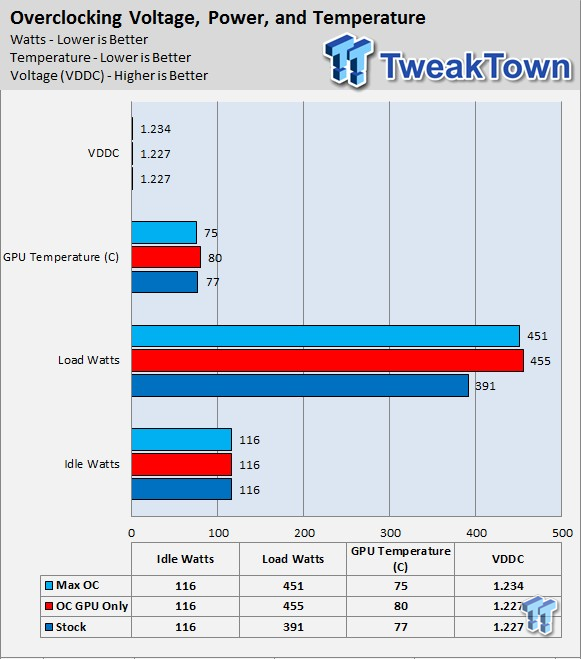 This chart displays the other variables involved in the overclocks, including the maximum GPU core voltage (VDDC), idle and load total system power draw, and GPU core temperature.

Also, while VisionTek deviated from the DirectFETs that the standard R9 290 uses, they kept things in the International Rectifier family, and replaced them with PowIRstages, which should do the same, or even better. The standard Radeon R9 290 also uses SK Hynix based memory; however, VisionTek is using Elpida based memory modules, which have proven to be pretty good overclockers in the past.

The cooling is what really sets this card apart from the competition. The heat sink is a monster, and performs like one. GPU Core temperatures barely increased when I jacked up the GPU Core clock 20%, and AMD's auto overclocking boost profile felt comfortable enough to boost core speeds from 947MHz to 975MHz.

The backplate is a very nice addition; it brings functionality in the form of protection and cooling, and also adds aesthetic value to the card. If you are in the market for a strong R9 290 that will overclock a decent amount, and stay cool at the same time, then the VisionTek R9 290 might just fit the bill.

PRICING: You can find the VisionTek R9 290 for sale below. The prices listed are valid at the time of writing, but can change at any time. Click the link to see the very latest pricing for the best deal.